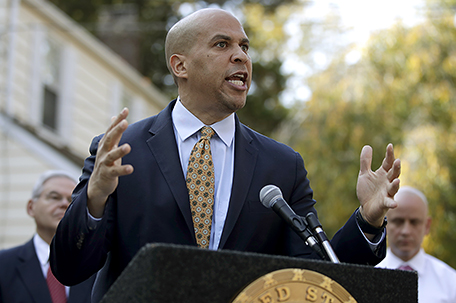 Senator Cory Booker and his family have received a recent death threat, ABC News reported. Police officers have been added to Booker’s security detail at his Newark, New Jersey residence as a result of the threat, Newark Mayor Ras Baraka said in a statement Saturday.

“The Newark Police Division has been notified by the United States Capitol Police (USCP) regarding a threat on the life of New Jersey Senator Cory Booker and his family members,” Baraka said. “As a result, members of the Police Division’s Executive Protection Unit have been assigned to provide security at the Senator’s residence in Newark. The USCP provides protection to Members of Congress and we are closely coordinating with the agency to ensure Senator Booker is able to carry out his duties of serving New Jersey’s residents in Congress in a safe manner.”

The security detail “will have no impact on police services,” according to Baraka. Information about the source of the death threat,  any arrests in connection with it or any other specifics was not given.

News of the threat came after Booker called for President Trump to resign and leave The White House on December 9, North Jersey reported. The Democratic lawmaker, who is being eyed as a presidential candidate hopeful in 2020 and campaigned for Doug Jones, is far from alone in wanting Trump out. Four more senators — three Democrats including New York’s Kirsten Gillibrand and Bernie Sanders — have joined Booker and Sen. Jeff Merkley of Oregon in demanding Trump’s resignation. Of course, social media users, Black millennials and civil rights activists have been talking about POTUS’ possible impeachment for some time now.