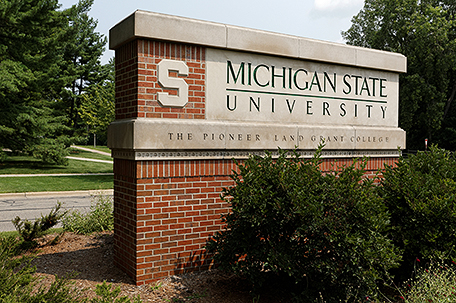 University spokeswoman Emily Gerkin Guerrant apologized in a statement, adding that “people were hurt and offended” regardless of the intent of the display at the Wharton Center for Performing Arts. The training will focus “on the impact and understanding of intentional and unintentional racial bias,” the statement said.

The felt ornaments hung from the tree-shaped rack depicted figures such as former President Barack Obama, first lady Michelle Obama and Prince. The dolls were noticed by Krystal Rose Davis-Dunn, a Black graduate student, who told the Lansing State Journal that there were other trees holding dolls of historic Black figures, as well as a few White leaders.

Davis-Dunn said she asked employees if they saw anything wrong with the displays, but they did not. She added for her, it recalled images of “African-American people hanging from twine.”

“That is problematic,” she said, adding that she came to the center for a jazz concert after a day of meetings with university leaders to discuss boosting equality and diversity on campus. “You’re lynching black people from trees.” Guerrant told The Associated Press in an email Tuesday that the display of historic dolls and ornaments was part of February’s Black History Month celebration. The Wharton Center is hosting several events, including “We Shall Overcome: A Celebration of Martin Luther King Jr.” on Feb. 14. Guerrant said the incident is being investigated by the university’s Office of Institutional Equity.

Black rag dolls meant to be abused are pulled from stores