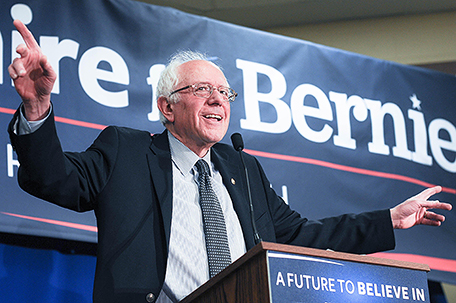 By Nicholas Riccardi and Lauran Neergaard

WASHINGTON — Bernie Sanders’ campaign said Wednesday that the Democratic presidential candidate had a heart procedure for a blocked artery and was canceling events and appearances “until further notice.”

The 78-year-old Sanders was taken to a Las Vegas hospital after he experienced chest discomfort during a campaign event Tuesday and sought medical evaluation. Two stents were “successfully inserted” and Sanders “is conversing and in good spirits,” according to the campaign.

Sanders’ wife, Jane O’Meara Sanders, was en route to Las Vegas on Wednesday and said in an email to The Associated Press that her husband was “doing really well.”

Tick Segerblom, a Clark County, Nevada, commissioner who was at Sanders’ fundraiser Tuesday, said the senator seemed fine at the time. “He spoke well. He jumped up on the stage. There was just nothing visible,” Segerblom said.

The Democratic field’s oldest candidate, Sanders sometimes jokingly refers to his age at town halls and other events, especially when interacting with younger participants. He is one of three candidates over age 70 in the Democratic primary, which has spurred debate over whether the party should rally behind a new generation of political leaders. Sanders’ health issue is certain to revive that discussion in the weeks before the next presidential debate this month.

Sanders’ hospitalization came on a day of celebration for his campaign, which had earlier announced the Democratic field’s strongest quarterly fundraising numbers so far. On a telephone call with supporters, campaign manager Faiz Shakir said the “state of the campaign is strong” and touted fundraising total and its first television ad campaign scheduled to launch in Iowa.

But those spots were suspended on Wednesday.

The health issue comes as Sanders has been trying to turn a corner after a summer that saw him eclipsed as the premier liberal in the field by Massachusetts Sen. Elizabeth Warren, 70. Sanders has dropped well behind Warren and Biden in most polls and recently reshuffled his staffing in early states to become more competitive.

“Given his recent stalls in the polls, the timing is pretty bad here,” Democratic strategist Jim Manley said of Sanders’ heart procedure.

Sanders’ rivals were quick to wish him well. Warren told liberal activists in Las Vegas that she called and texted Sanders and that she “wants to see him strong and back on the trail as soon as possible.”