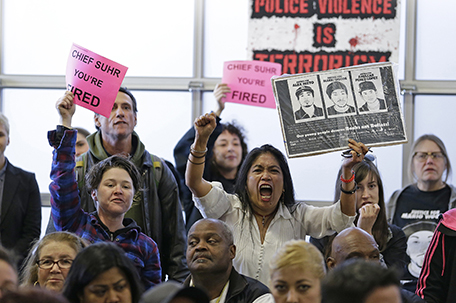 ABOVE PHOTO:  People yell for the firing of San Francisco police chief Greg Suhr during a town hall meeting to provide the Mission District neighborhood with an update on the investigation of an officer involved shooting Wednesday, April 13, 2016, in San Francisco. The meeting came after 45-year-old Luis Gongora was shot and killed by police at a homeless encampment on Thursday, April 7, 2016.  (AP Photo/Eric Risberg)

SAN FRANCISCO –San Francisco’s police chief said Friday that he has ordered that all officers finish an anti-harassment class within the next month amid a racist texting scandal that has rocked the department already dogged by fatal shootings of unarmed minority suspects.

It’s the second texting scandal the department has endured since 2014. Suhr says he has no plans to resign and Mayor Ed Lee says he supports the chief.

Lee sent an email letter to the entire department of nearly 2,100 officers Thursday night calling on them to report colleagues who display intolerant behavior.

Suhr said Friday that two officers turned in by colleagues for suspected overtime abuse and unauthorized access of driving records are now being investigated by the district attorney for possible criminal charges.

Investigators say they found the text messages on the personal phones of the officers during criminal probes of former officer Jason Lai and retired Lt. Curtis Liu.

“The vast majority of police officers are shaken,’’ Suhr said. “The expectations have never been higher, so when officers do something like this, the disappointment can’t be greater.’’

Lai resigned earlier this month and Liu retired last year. Both are Chinese Americans, according to Suhr. The unidentified officer also resigned and a fourth officer also implicated in the texting scandal Suhr declined to identify is facing dismissal before the city’s Police Commission.

The newly provided transcripts denigrate minority suspects with racial slurs and insult colleagues perceived to be gay. The texts ridicule blacks in Ferguson, Missouri, where police shot and killed an unarmed black man.

Liu’s attorney Tony Brass said that the texts investigators turned over to him show Liu only on the receiving end. Brass said he may not be privy to all Liu’s texts, only the ones that pertain to his criminal case.

“But I can say that there (has) not been a single allegation that Curtis Liu has ever displayed any racist behavior,’’ Brass said.