Ruth Bader Ginsburg: The Fight Is Never Over, Not Even After You Lose 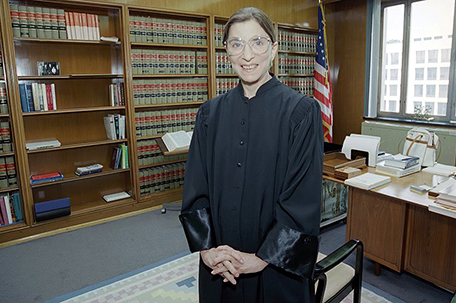 ABOVE PHOTO: FILE- In this Aug. 3, 1993, file photo, then-Judge Ruth Bader Ginsburg poses in her robe in her office at U.S. District Court in Washington. Earlier, the Senate voted 96-3 to confirm Bader as the 107th justice and the second woman to serve on the Supreme Court. Ruth Bader Ginsburg died at her home in Washington, on Sept. 18, 2020, the Supreme Court announced. (AP Photo/Doug Mills, File)

“Fight for the things you care about, but do it in a way that leads others to join you,” the former associate justice of the Supreme Court once said.

Her early challenges growing up in Brooklyn, N. Y. tested her strength and prepared her for a purpose-driven life spent dismantling inequality and gender discrimination. Her older sister died when she was a baby; her mother died of cancer and was buried the day before her high school graduation. Adversity taught her to work harder.

Ginsburg went on to earn her bachelor’s degree at Cornell University where she met her husband, Martin. She was a young mother with a baby when she began studies at Harvard Law School. After her husband received a job in New York, she transferred to Columbia Law School, where she graduated and tied for first in her class.

Nobody back then would hire a bright female lawyer so after graduation she created a new career path. Ginsburg devoted herself to advancing gender equity by arguing that the Constitutions’ guarantee of equality put women and men on equal footing.

This was a concept so novel that it was not easily grasped by men of that day, Ginsburg said.

It is difficult to explain injustice to someone who has never been knocked down by it. In a documentary on her life, called RBG, Ginsburg would later describe herself as ‘part kindergarten teacher’ for the role she played educating others about women’s challenges.

It took awhile for her to find the right argument but she did: “Think about how you would like it to be for your wife and daughters,” she would ask.

As Ginsburg began winning cases before the U.S. Supreme Court, gender barriers began to fall. As a result, life became easier for women ensuring, for example, they could get a mortgage or open a checking account without a male co-signer and receive benefits equal to their male colleagues.

“I ask no favor for my sex,” Ginsburg would say in closing arguments before the Supreme Court. “All I ask of our brethren is that they take their feet off our necks.”

Ginsburg volunteered for the American Civil Liberties Union and served on its board of directors and as one of its general counsels in the 1970s. In 1980, President Jimmy Carter appointed her to the U.S. Court of Appeals for the District of Columbia and in 1993 Bill Clinton nominated her for the Supreme Court.

As a woman and business owner, I am deeply grateful for all that Justice Ginsburg has done for me. Had it not been for her, I might not have had so many career options as an African American woman, including the ability to work for myself, make business and contract decisions or to buy a house.

However, I most admire her for the way that she behaved in defeat, and used disappointment over a court ruling to educate others, like a kindly kindergarten teacher might do.

In her dissent on the landmark ruling, Holder vs Shelby County, Ginsburg argued passionately that voting discrimination had not ended.

The case concerned the constitutionality of two key provisions of the Voting Rights Act of 1965: Section 5 protected minority voters’ rights by requiring that certain states and local governments obtain federal preclearance before making changes to their voting laws or practices; and Section 4(b), laid out the coverage formula that determines which jurisdictions are subjected to preclearance based on past discriminatory voting practices.

On June 25, 2013, the U.S. Supreme Court ruled by a 5-to-4 vote that Section 4(b) is unconstitutional because the coverage formula, which determined which jurisdictions were subjected to pre -clearane- a type of overview or monitoring- was based on data over 40 years old.

Chief Justice John Roberts reasoned that Coverage today was based on decades-old data and eradicated practices, suggesting that preclearance had been effective and was no longer needed.

Ginsburg disagreed. “Throwing out preclearance when it has worked and is continuing to work to stop discriminatory changes is like throwing away your umbrella in a rainstorm because you are not getting wet,” she wrote in her dissent.

Ginsburg taught us that if our side doesn’t win, the fight still is not over. We must turn dissent into an art and skill, as she did. And we must do it in a manner that opens hearts and minds to our way of thinking.

“Reacting in anger or annoyance will not advance one’s ability to persuade.,“ she wrote in an op-Ed for the New York Times.

Affectionately nicknamed Notorious RBG by a generation of youthful admirers, Ginsburg understood that loud and angry mass protests aren’t the only way to fight back. Sometimes, one person who works unbelievably long hours, and chooses her words with care, can make this a more equitable world.