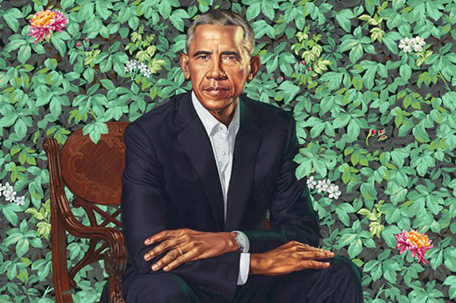 Kehinde Wiley and Amy Sherald are the first Black artists to be commissioned by the National Portrait Gallery to paint a presidential couple.

History was made Monday morning in Washington, DC when the Smithsonian’s National Portrait Gallery unveiled the official portraits of Barack and Michelle Obama.

The significance of the moment was not lost on the packed crowd assembled to view the unveiling of the paintings, including Obama-era politicians (former Vice President Joe Biden, former Attorney General Eric Holder, and campaign strategist David Axelrod) and Hollywood elite (director Steven Spielberg, producer Shonda Rhimes, and actor Tom Hanks). The highly anticipated commissions offer a far more contemporary interpretation of portraiture than the buttoned-up images of presidents who came before.

Together, artist and subject lifted the brown curtain covering up each work. Wiley, known for his stately paintings that depict contemporary African Americans in poses that reference art history, chose to portray former President Barack Obama in a comparatively relaxed fashion.

He is sitting in a chair, leaning forward, wearing a black suit, plain white shirtand no tie. The chair is almost engulfed by a lush background of botanicals, which include the state flower of Chicago and other plants that are native to Hawaii and Kenya.

“In a very symbolic way, what I’m doing is charting his path on Earth through those plants that weave their way through,” Wiley told the crowd.

Amy Sherald, who won the $25,000 first prize in the gallery’s 2016 portrait competition, presented Michelle Obama in the artist’s signature grayscale palette wearing a dramatic, geometric gown. Her dress, by American designer Milly, is meant to evoke both the work of Dutch painter Piet Mondrian and the dazzling quilts by Gee’s Bend, a remote community of Black artists and quilters in Alabama.

“The act of Michelle Obama being her authentic self became a profound statement that engaged all of us,” Sherald said. “Because what you represent to this country is an ideal: A human being with integrity, intellect, confidence, and compassion.” 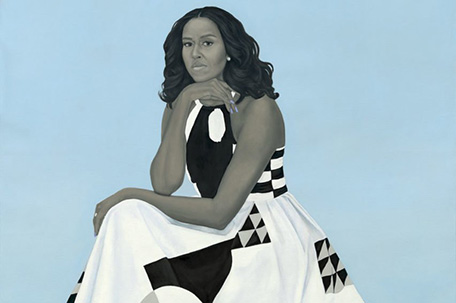 Both Barack and Michelle Obama noted that they were, as far as they knew, the first in their families to have their portraits painted.

“I’m thinking about all the young people — particularly girls, and girls of color — who in years ahead will come to this place and look up and see an image of someone who looks like them hanging on the wall of this great American institution,” the former first lady said. “I know the kind of impact that will have on their lives because I was one of those girls.”

When the artists arrived at the Oval Office for what must have been the most nerve-wracking job interview of their lives, the Obamas recalled clicking with their respective portraitists immediately. The former president noted that he felt a particular kinship with Wiley, who, like Obama, was born to an American mother who raised him and an African father who was mostly absent.

Obama said he was also struck by the way that Wiley’s work “challenged our conventional views of power and privilege, and the way he would take extraordinary care and vision in recognizing the beauty and the grace and dignity of people who are so often invisible.”

The final portrait, however, required some concessions from the artist. Although Obama unsuccessfully tried to negotiate “less gray hair” and “smaller ears,” the former president said he did manage to convince Wiley to tone down the regal grandeur that is typical in his work.

“His initial impulse was to also elevate me, put me into these spaces with partridges and scepters and drones and mounting me on horses,” Obama told the laughing crowd. “I had to explain that I’ve got enough political problems without you making me look like Napoleon.” (Wiley jovially contradicted the former president’s version of events when he took the podium: “How do you explain that a lot of that is just simply not true?” he said.)

Both paintings are now part of the museum’s collection and will go on view immediately. Wiley’s portrait will be permanently installed in the museum’s “America’s Presidents” exhibition, while Sherald’s work will be on view in the “Recent Acquisitions” corridor through November.

Both artists fought back tears as they thanked their mothers for helping them arrive at this momentous occasion.