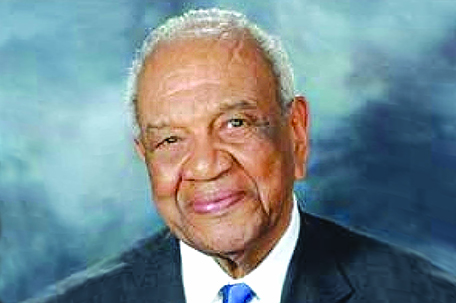 The Rev. Gardner Taylor, a Baptist minister whose social conscience and gift for oratory made him one of the most influential African-American preachers during the civil rights movement and beyond, died April 5 in Durham, North Carolina. He was 96.

The cause was an apparent heart attack, said his wife, Phillis Taylor.

During a ministry that spanned decades, Taylor became known and celebrated both for his charisma in the sanctuary and his leadership outside the church walls. In 2000, President Bill Clinton awarded him the Presidential Medal of Freedom.

A grandson of slaves, Taylor grew up in the segregated South but spent much of his pastoral career in New York. From 1948 until his retirement in 1990, he was pastor of Concord Baptist Church of Christ in the Bedford-Stuyvesant neighborhood of Brooklyn. Under his leadership, the congregation grew to an estimated 10,000. His pulpit, the scholar Michael Eric Dyson has said, became “the most prestigious in black Christendom.”

Known by the end of his life as the dean of African-American preachers, Taylor was endowed with a voice whose power was equated to that of a pipe organ. His sermons touched on human struggle — a theme that was both timeless and immediately relevant for participants in the civil rights movement.

The Black civil rights movement and Zionism (Part one)