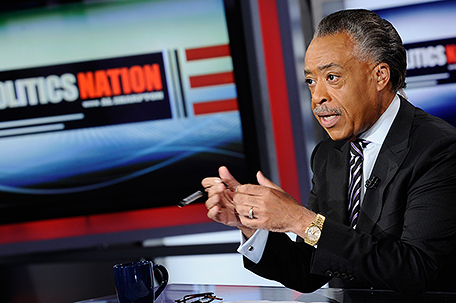 In a move that will make conservatives and extreme right-wingers rejoice, MSNBC is reportedly going to get rid of the left-wing programming and liberal hosts in light of their recent ratings slide and therefore will remove Rev. Al Sharpton from his nightly TV show slot.

Sharpton has had a successful run with “Politics Nation With Al Sharpton” since 2011, but the exit of liberal firebrand Keith Olbermann to ESPN, along with the 6-month banishment of the iconic Brian Williams, has caused seismic quakes at the mothership network that the executives are still reeling from.

According to the Daily Beast:

In the longer term, these sources said, the Rev. Al Sharpton—a larger-than-life personality who attracts a 35 percent African-American audience but continues, after 3½ years of nightly practice, to wrestle with his Teleprompter—could eventually be moved from his weeknight 6 p.m. slot to a weekend time period, as MNSBC President Phil Griffin attempts to reverse significant viewership slides by accentuating straight news over left-leaning opinion.

“Everybody in the food chain from top to bottom understands that the Olbermann era is over,” said an MSNBC source, referring to the glory days during George W. Bush’s administration when incendiary liberal Keith Olbermann regularly attracted a million viewers—many of them seeking refuge from White House and Republican talking points.

The MSNBC source said, “Going left was a brilliant strategy while it lasted and made hundreds of millions of dollars for Comcast, but now it doesn’t work anymore…The goal is to move away from left-wing TV.”

Sharpton is not alone in being on the hot seat. It is also being reported that popular hosts Ed Schultz, Chris Hayes, and Lawrence O’Donnell could also be gone in the network’s reshuffling of their lineup. Joy Reid’s and Ronan Farrow’s shows have already been cancelled in what may turn out to be a complete overhaul when everything is said and done.

The one keeper seems to be Rachel Maddow, who is beloved by the left. Currently her show airs at 9 p.m., but the reports state that Maddow will replace Chris Hayes in the coveted 8 p.m. time slot while the network looks to fill the vacancy for 9 p.m.

Sharpton was unable to be reached for comment for this story.