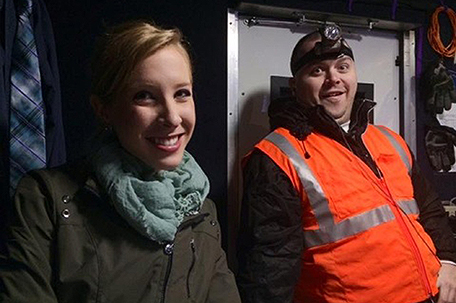 ABOVE PHOTO:  This undated photograph made available by WDBJ-TV shows reporter Alison Parker, left, and cameraman Adam Ward. Parker and Ward were fatally shot during an on-air interview, Wednesday, Aug. 26, 2015, in Moneta, Va. Authorities identified the suspect as fellow journalist Vester Lee Flanagan II, who appeared on WDBJ-TV as Bryce Williams. Flanagan was fired from the station earlier this year.  (Courtesy of WDBJ-TV via AP)

MONETA, Va.  — A TV reporter and cameraman were shot to death during a live television interview Wednesday by a gunman who recorded himself carrying out the killings and posted the video on social media after fleeing the scene.

Authorities identified the suspect as a journalist who had been fired from the station earlier this year. Hours later and hundreds of miles away, he ran off the road and a trooper found him with a self-inflicted gunshot wound. He died at a hospital later Wednesday.

The shots rang out on-air as reporter Alison Parker and cameraman Adam Ward were presenting a local tourism story at an outdoor shopping mall. Viewers saw her scream and run, and she could be heard saying “Oh my God,” as she fell. Ward fell, too, and the camera he had been holding on his shoulder captured a fleeting image of the suspect holding a handgun.

WDBJ quickly switched back to the anchor at the station, her eyes large and jaw dropping as she said, “OK, not sure what happened there.” The station later went live again, reporting on their own station and staff as the story developed.

Parker and Ward were killed as the gunman fired about 15 shots. Their interview subject, Vicki Gardner, was in stable condition later Wednesday after surgery for her wounds.

The gunman was Vester Lee Flanagan II, 41, of Roanoke, who appeared on WDBJ as Bryce Williams, authorities said.

Jeffrey Marks, WDBJ’s president and general manager, said Flanagan had to be escorted by police out of the station when he was fired. Marks described him as “an unhappy man” and “difficult to work with,” always “looking out for people to say things he could take offense to.”

“Eventually after many incidents of his anger coming to the fore, we dismissed him. He did not take that well,” Marks explained.

Video posted hours after the shooting on Bryce Williams’ Twitter account and Facebook page showed an outstretched arm holding the handgun and firing repeatedly at Parker as she tried to run away. 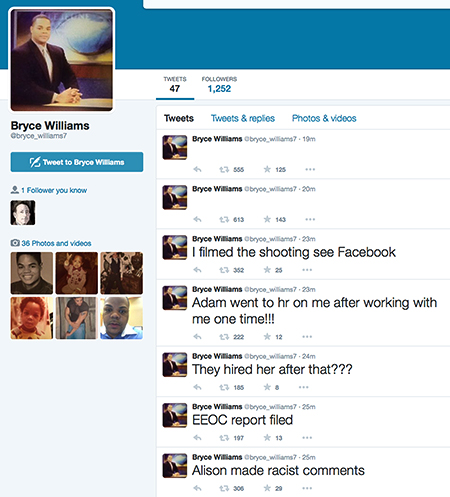 This screen shot shows the Twitter page of Bryce Williams, whose real name is Vester Lee Flanagan II, shortly after he fatally shot WDBJ-TV cameraman Adam Ward and reporter Alison Parker during a live broadcast in Moneta, Va., early Wednesday morning, Aug. 26, 2015. The station said Flanagan was also an employee at WDBJ and appeared on air as Bryce Williams. (Twitter via AP)

The shooter appeared to walk up to the victims and stand a few feet away from them while holding the weapon. The three, in the midst of a live TV interview, do not seem to notice the gunman, who doesn’t start shooting until Ward points the camera at Parker.

Ward was engaged to a producer at the station, Melissa Ott, who was celebrating her last day on the job and was in the control room, watching it live, as the shooting unfolded, Marks said.

Tweets posted on Williams’ Twitter account Wednesday described workplace conflicts with both victims. They say Williams filed a complaint with the Equal Employment Opportunity Commission against Parker, and that Ward had reported Williams to human resources.

Marks said Williams alleged that other employees made racially tinged comments to him, but said his EEOC claim was dismissed and none of his allegations could be corroborated.

“We think they were fabricated,” Marks said.

ABC News reported on its website that the network received a 23-page fax from someone claiming to be Williams. The network said the fax was turned over to authorities, and did not elaborate on its contents.

“This gentleman was disturbed at way things had turned out at some point in his life. Things were spiraling out of control,” Franklin County Sheriff W.Q. “Bill” Overton Jr. said at a news conference.

Both the victims were romantically involved with other employees at the station, according to Parker’s boyfriend, WDBJ anchor Chris Hurst. He wrote online that they hadn’t shared their relationship publicly but “were very much in love.” He said they had just moved in together and wanted to get married. “I am numb,” he said.

The shooting happened around 6:45 a.m. at Bridgewater Plaza in Franklin County, as Parker interviewed Gardner about the upcoming 50th anniversary festivities for Smith Mountain Lake, a local tourism destination.

Ward, 27, graduated from Virginia Tech and was engaged to a producer at the station, Melissa Ott, said WDBJ spokesman Mike Morgan.

“Adam was our go-to guy. He pretty much was available to do anything that we asked,” Morgan said. “He did live shots during our morning show for several years.”

Parker had just turned 24 and had joined the station as an intern after attending James Madison University, where she was the editor of the school’s newspaper, The Breeze. According to her Facebook page, Parker spent most of her life outside Martinsville, Virginia. She was an avid kayaker and attended community theater events in her spare time.

The station is based in Roanoke, Virginia, and serves the southwest and central part of the state. The shootings happened at a mall just off Smith Mountain Lake in Moneta, about 25 miles southeast of Roanoke.