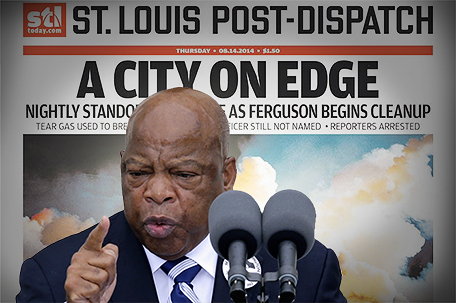 Congressman John Lewis is the only living member of the “Big Six.” He represented SNCC with a speech at the August 28, 1963 March on Washington. He has represented the 5th District of Georgia, a district that includes almost all of Atlanta, in the United States House of Representatives since 1987 and he is still fighting today for the dream of Dr. King. to be fulfilled.

Rep. John Lewis is no stranger to maltreatment. The youngest and only living member of the Big Six – prominent leaders of six of the civil rights organizations – he is an original freedom fighter who’s had his share of arrests and confrontations with white segregationists and law enforcement officials.

Lewis recently spoke out about the senseless shooting of black teen Mike Brown and the ongoing civil unrest in Ferguson, Missouri. Here’s his opinion.

“The death of Michael Brown is a grave tragedy the community of Ferguson, Missouri should not have to bear. How many more young men of color will be killed before we realize that we have a problem in America? We are permitting the incarceration and shooting of thousands of black and brown boys in their formative years who might have become great artists, leaders, scientists, or lawyers if we had offered them our support instead of our suspicion.

“It is a shame and a disgrace that a city with a significant African American population has only three representatives from that community on the police force. What kind of a police department is it that would refer to the people it should be trying to protect as animals? It is unbelievable that these ideas could run rampant in 2014. This is not 1940 or 1950 in America, but today it is hard to see the difference.

“This is not China or Russia or Syria. This is America, and in this country we have a right to protest in a peaceful, orderly non-violent fashion, and the press should be free to cover these protests without fear. The police should not interfere in the exercise of these constitutional rights. If people are not allowed to express their dissatisfaction through peaceful protest, they will find other means to make their voices heard.

“This is a good time to consider the words of Martin Luther King Jr., who said that “Peace is not the absence of conflict, but the presence of justice.” I am glad the federal government will make an independent investigation of these matters.

“I urge every agency, every department, every community, every official and every person involved in this conflict to allow the whole truth to emerge so that peace–true peace and real justice will be the result.

“My prayers are with the family of Michael Brown who lost their hope for a better future, with the city of Ferguson which has become the crucible of this conflict, and my prayers are for this nation still struggling with the scars and stains of racial discrimination, wanton violence, and flagrant injustice.”