Removing flag may get done, but not now 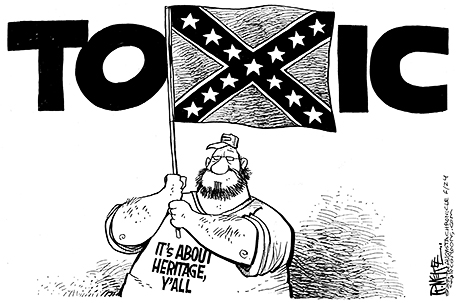 Special to the NNPA from The Charleston Chronicle

The heinous June 17 massacre of nine African American worshippers at Mother Emanuel AME Church in Charleston by a white supremacist spewing hatred for Blacks has spawned a renewed demand for removal of the Confederate Flag from the South Carolina Statehouse grounds. But surprisingly, while Blacks led by the state’s NAACP conference consistently have called for the flag’s removal, the demand now comes from Gov. Nikki Haley and some Republican supporters.

While Haley surprised many with the announcement made during a press conference, a similar press conference later was held in North Charleston where Mayor Keith Summey, flanked by local public and civil rights organizations officials made the same demand.

The Confederate Flag doesn’t represent the future of South Carolina, Haley said. It is time to remove the Confederate Flag from the Capitol grounds. One hundred fifty years after the end of the Civil War, the time has come, she said.

The South Carolina General Assembly has to muster a two-thirds vote in each the senate and house of representatives to approve the flag’s removal. They also have to muster a two-third vote in each chamber to debate the issue. Legislators are in Columbia this week to finalize a state budget. Charleston legislators Rep. Wendell Gilliard and Sen. Marlon Kimpson said it’s unlikely the general assembly will take action to remove the flag this week.

Former Charleston Sen. Robert Ford criticized those calling for the flag’s removal at this time. “This is a time of major crisis,” he said emphasizing the state’s citizenry still is reeling from the church murders. “This is the time we should be mourning not kicking around an issue that can wait at least until we bury our dead.”

Ford, who was instrumental in a political compromise 2000 that removed the flag from its original position atop the state house dome to its grounds near the Confederate Soldier’s Monument, said he feels current supporters for the flag’s removal are doing so now because they have either personal or political agendas.

“I think this is a sideshow. They could have waited a week until the memorials for all the victims are over. This was the worse church assassination in American history. We should be mourning,” he said. However he added, “But in a week it would be forgotten.”

Ultimately, Ford said he feels the general assembly will remove the flag from the capitol’s grounds. But the fight will be an uphill battle, he said.

“If the governor is willing to go on national television and put her political future on the line (Haley could be eyeing the nomination to run as vice president in 2016, Ford suggested), she has the votes to get it done,” he said. “My concern is 70 percent of the whites in the state say leave the flag there and most of them live in conservative districts represented by people who want to get re-elected.”