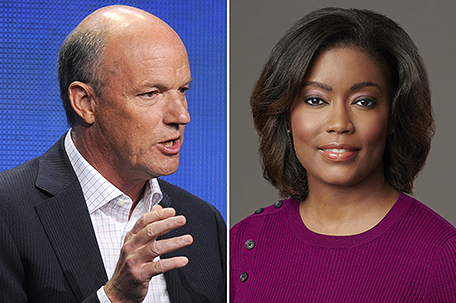 ABOVE PHOTO: In this combination photo, Phil Griffin, left, speaks at the NBC Universal summer press tour, Aug. 2, 2011, in Beverly Hills, Calif., and Rashida Jones poses for a portrait. Griffin is stepping down after 12 years as MSNBC president and will be replaced by Rashida Jones, who has been head of breaking news at NBC and recently directed the network’s coverage of the 2020 election. She is the first Black executive to lead a cable news network.  (AP Photo, left, and MSNBC via AP)

NEW YORK — Phil Griffin is stepping down as the longtime president of MSNBC, to be replaced early next year by rising NBC News executive Rashida Jones.

Griffin, 64, has worked at NBC News for 35 years and has been president of MSNBC since 2008. With a primetime lineup led by Rachel Maddow, it has become established as the favorite of those wanting news from a liberal perspective.

Jones, who has been with NBC News for the past seven years, is currently chief of breaking news and major events at the network. She just led the network’s coverage of the 2020 presidential election and the team preparing Kristen Welker as moderator of the third presidential debate.

She’s the first Black executive to lead one of the major cable networks. Cesar Conde, the new chairman of the NBCUniversal News Group, has made diversity one of his top priorities.

“She leads with a laser-like focus and grace under pressure,” Conde said.

Jones takes over on Feb. 1. Her immediate challenge will be leading the network into coverage of the Biden administration; many in the news industry have feared that the exit of President Donald Trump means the time of high ratings for news networks may be coming to an end.

Griffin is leaving the network, and it’s not immediately clear what he’ll be doing next. “Phil has built something remarkable,” Conde said in a memo to NBC News staff. “He leaves the network in the best shape it has ever been. Six straight record years. Each one better than the last.”