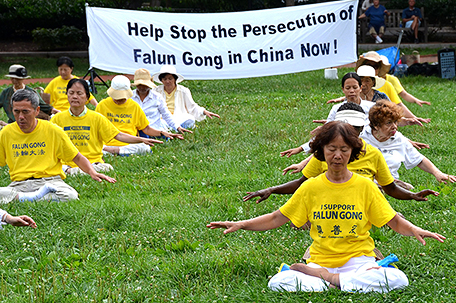 Several local Falun Gong practitioners who were persecuted in China joined the rally. Lichun Shen, a 60-year-old woman, began to practice Falun Gong in 1995. Shortly after that, the illnesses that bothered her for many years disappeared including neurotic disorder, arthritis, and stomach disease.

However, former communist leader Jiang Zemin banned Falun Gong on July 20, 1999, and started the massive suppression movement in China. Having witnessed the physical and spiritual benefits of Falun Gong, Shen decided to visit appealing offices and tell officials that Falun Gong is beneficial and the persecution is wrong. Because of that,  Shen had been arrested several times and detained in jail for 11 years in China totally.

In May 2001, Shen was arrested and sent to the Anhui Province Women’s prison for 8 years.  “Those 8 years were the darkest days in my life,” she said tearfully. Every day we woke up at 4~5 am in the morning and were forced to work till midnight, and went to bed at 2am. In addition, we often worked 24 hours in a row without sleep to finish the heavy workload. We only had four or five days of break in the entire year.”

“Every day we stayed in dust and noise,” she continued. “On the other hand, the slave labor brought lots of money to the officials. A guard one day said that the prison accidently earned 100 million Yuan one month early. To make things worse, because I refused to give up my belief that I had to work in the day time, and were forced with brainwashing at night with no sleep allowed for many days.

When I was detained, I lost my job. Chinese Communist Party officials ransacked my home and harassed my family. Because of that huge pressure, my mother passed away. “

Falun Gong, also known as Falun Dafa, is a traditional practice of meditation and exercises with teachings based on the universal principle of “Truthfulness-Compassion-Tolerance.” It was made public in 1992 by  Li Hongzhi. It quickly spread by word of mouth throughout China, and is now practiced around the world. With government estimates of as many as 100 million practicing Falun Gong, China’s leader Jiang Zemin outlawed the peaceful practice in July 1999. Unable to crush the spirit of millions who had experienced improved health and positive life changes from Falun Gong, the practice has been subject to well-documented egregious human rights violations. The scale and scope of abuses taking place make this possibly the largest religious persecution in the world today.