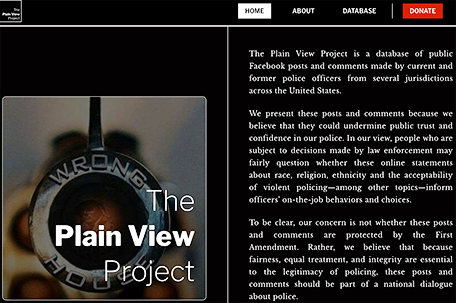 Police departments in at least five states are investigating, and in some cases condemning, their officers’ social media feeds after the  publication of a database that appears to catalog thousands of bigoted or violent posts by active-duty and former cops.

The posts were uncovered by a team of researchers who spent two years looking at the personal Facebook accounts of police officers from Arizona to Florida. They found officers bashing immigrants and Muslims, promoting racist stereotypes, identifying with right-wing militia groups and, especially, glorifying police brutality. All the posts were public.

“It’s a good day for a choke hold,” wrote an officer in Phoenix. A sergeant in Philadelphia commented that a young suspect should be “taken out back and put down like the rabid animal he is.” Another sergeant posted a meme that said, “Death to Islam.” In St. Louis, a police official shared a meme asserting that “if the Confederate flag is racist, then so is Black History Month.”

“Obviously, some of the posts are very disturbing,” said Emily Baker-White, a lawyer who launched the Plain View Project in 2017. The work, she said, revealed a troubling online subculture that threatens to undermine public confidence in law enforcement.

“It gets in the way of officers’ ability to protect everybody out there,” she said. “My biggest fear is that there are people who are seeing these posts online, who are interacting with these officers, who think, ‘The police might not be there for me because I pray differently than they do, or I look differently, or I have a different immigration status.’”

Police departments often have social media policies that limit what officers may say online, and most of the departments included in the Plain View database said this week they are launching investigations into their officers’ Facebook feeds.

“These posts are disturbing and unacceptable,” Mayor Lyda Krewson said in a statement. “We expect professionalism out of every city employee. No exceptions.”

“They completely contradict how the Phoenix Police Department should speak about the members of our community or others,” Williams said in a statement.

The database includes a 2014 Facebook post purportedly by Galen Detweiler, a York officer who worked for Baltimore police at the time. “Bucket list: Punch a guy so hard he poops himself,” the post said. The comment had a checkmark next to it.

Three years later, Detweiler was caught on video repeatedly punching a female suspect in the face during a struggle outside a York bar.

The woman’s attorney, Leticia Chavez-Freed, said Wednesday she plans to use his 2014 post as an exhibit in a federal lawsuit alleging he used excessive force.

“You just see how embedded this culture is of punishing instead of policing, a lack of compassion for people who may not look like you, and frankly a love of violence,” she said.

Baker-White, a former federal public defender in Philadelphia, got the idea for Plain View after she was assigned to a police brutality case and found an inflammatory social media post by one of the officers involved.

“That made me ask the question, how prevalent is this stuff? How much of this stuff is out there?” she said.

Funded by private donation, Baker-White and her team pored through the Facebook accounts of more than 2,800 current officers and nearly 700 former officers.

They wound up flagging posts by 556 of the current officers — about one in 5 of those studied — and 299 former officers. The database includes more than 5,000 posts, as well as comments on the posts. The results were jointly published on Saturday by Injustice Watch, a not-for-profit journalism organization that provided administrative support as Plain View Project’s fiscal sponsor, and by BuzzFeed News.

The Lake County, Florida, Sheriff’s Office said Wednesday it is reviewing posts by 16 deputies. Though department policy bars employees from posting material that is “unethical, slanderous, derogatory … or that tends to compromise the integrity of the member,” spokesman John Herrell said employees are given a “great deal more latitude” if they don’t identify themselves as members of the law enforcement agency.

And in Denison, Texas, City Manager Judson Rex said that the city 80 miles north of Dallas “does not condone racism or hate of any kind, on or off the job” and will discipline officers “if needed.”

The Dallas Police Department did not respond to written questions Wednesday.