Racism seen as root of water crisis in Mississippi capital 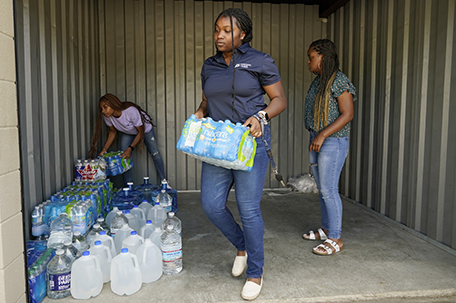 ABOVE PHOTO: Mississippi Students Water Crisis Advocacy Team members, Jordyn Jackson, 21, left, coordinator Maisie Brown, 20, right, and Mya Grimes, 18, carry out cases of water from their Jackson, Miss., storage locker for home delivery, Sept. 8, 2022. A boil-water advisory has been lifted for Mississippi’s capital, and the state will stop handing out free bottled water on Saturday. But the crisis isn’t over. Water pressure still hasn’t been fully restored in Jackson, and some residents say their tap water still comes out looking dirty and smelling like sewage.(AP Photo/Rogelio V. Solis)

JACKSON, Miss. — Carey Wooten spent nearly seven weeks hunting for safe drinking water for herself, her two children and three dogs after clocking out each day as a Taco Bell manager, so Gov. Tate Reeves’ announcement that the water is clean again in Mississippi’s capital came as welcome news.

But the crisis in the city of Jackson isn’t over, even if its boil-water advisory was lifted last Thursday. While the state plans to stop handing out free bottled water at sites around the city last Saturday night, the city said water pressure still hasn’t been fully restored, and state health officials said lead in some pipes remains so worrisome that pregnant women and young children should still use bottled water.

“The water that’s coming out of my kitchen sink smells like fresh sewage … as soon as you turn it on, it hits you right in the face. It’s horrible,” Wooten said earlier this month. “I’ve tried to give one of my dogs the water, but when she smells it she won’t even touch it. She walks away from it.”

Wooten said last Friday that the liquid flowing into her kitchen sink still smells like sewage, but not as bad as before, and she’s glad she won’t have to run to distribution sites before their bottled water supplies run out each day.

Other residents told The Associated Press last Friday that their water remains too discolored to count on, so now they’ll have to rely on water distribution by community-run charities or buy water again themselves, adding insult to injury.

Jackson had already been under a state health department boil-water notice for a month when torrential rain fell in August, flooding the Pearl River and overwhelming the treatment system. Water pressure abruptly dropped, emptying faucets for days.

How did this happen? Residents, politicians, experts, and activists say systemic racism is the root cause.

Jackson’s population has declined since 1980, a decade after the city’s schools began integrating. Many white families left for the suburbs, leaving less revenue to maintain the infrastructure. Middle class Black people then moved out to escape urban decay and rising crime. State and federal spending never made up the difference.

“The legacy of racial zoning, segregation, legalized redlining has ultimately led to the isolation, separation and sequestration of racial minorities into communities (with) diminished tax bases, which has had consequences for the built environment, including infrastructure,” said Marccus Hendricks, an associate professor of urban studies and planning at the University of Maryland.

Other cities across the United States could face similar challenges with aging water systems that are ill-equipped to handle more intense and frequent flooding caused by climate change, experts in water infrastructure and environmental justice told The Associated Press.

And when it comes to water scarcity and contamination, they say working-class communities of color are most vulnerable. Jackson’s population is more than 80% Black and the poverty level is 24.5%, according to the U.S. Census Bureau. Majority-Black Flint, Michigan, has struggled to remove lead from its water since 2014. Other areas where large poor or nonwhite populations lack reliably safe drinking water include major cities like Baltimore and Honolulu as well as smaller municipalities like Las Vegas, New Mexico; and Benton Harbor, Michigan.

Heather McTeer Toney worked to clean up discolored tap water as mayor of Greenville, Mississippi, before serving as the Environmental Protection Agency’s southeast regional administrator from 2014 to 2017. Now she works on environmental justice issues nationwide for the Environmental Defense Fund. She said many majority-minority communities lack consistent access to clean water.

“Any community that is suffering from lack of infrastructure maintenance is dealing with the same problem, maybe just on a different scale,” Toney said. “But across the nation, with …. poor communities that are often Black, brown, Indigenous and on the frontlines of the climate crisis, we see the same thing happening over and over again.”

“I don’t think we realize how deeply ingrained racism is in all of our structures and systems, including infrastructure,” said Brown, a 20-year-old student at Jackson State University who was born and raised in the city.

Brown is a member of the Mississippi Students Water Crisis Advocacy Team, a group of about 30 students delivering water to residents who are disabled, elderly or don’t have vehicles.

That’s what relief has looked like in Jackson — the people most affected doing what they can to help each other. But the limited handouts each day haven’t been enough, forcing people to buy water in stores.

The two cases Wooten and nearly 500 others picked up at the site in south Jackson one day contained just under nine gallons. That’s less than 3% of the roughly 300 gallons that the EPA says the average American family uses each day.

EPA Administrator Michael Regan said while visiting Jackson that he wants the city to get its fair share of federal money flowing to the state.

Reeves, a Republican, has not said how much Mississippi should spend on solving this problem.

The legislature directed $400 million of federal pandemic relief funds toward water infrastructure upgrades around the state, but it’s unclear how much Jackson will receive because cities are still applying for money. “We cannot perfectly predict what may go wrong with such a broken system in the future,” Reeves said last Thursday.

Karla McCullough, 46, is a Black woman and Jackson native who runs a charity that helped organize the distribution site where Wooten got her water. She told the AP that the city’s residents have experienced some level of water scarcity their entire lives.

“I want to be hopeful and optimistic,” McCullough said. “In my lifetime, I may not see the infrastructure fixed and it restored to a point where there are not any water issues. But my hope is that my son and his children won’t have to deal with this.”