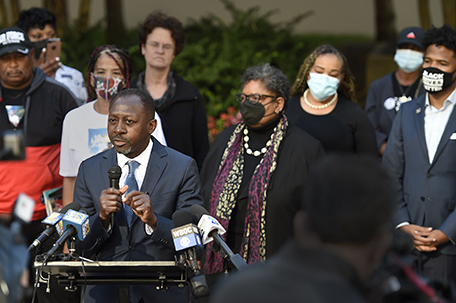 ABOVE PHOTO: Attorney for the Anton Black family, Ken Ravenell, with friends and family of Anton Black behind him, speaks during a press conference Thursday, Sept. 30, 2021, in Baltimore. Several new far-reaching laws aimed at increasing accountability in the investigations of police shootings and complaints against officers are taking effect this week in Maryland — a response to mass protests against racial injustice in policing that swept the country last year. (AP Photo/Gail Burton)

ANNAPOLIS, Md.— Several new far-reaching laws aimed at increasing accountability in the investigations of police shootings and complaints against officers took effect last week in Maryland — a response to mass protests against racial injustice in policing that swept the country last year.

The ambitious police reform measures were approved by the Democrat-controlled Maryland General Assembly earlier this year, after lawmakers overrode three vetoes from Republican Gov. Larry Hogan. The changes followed last year’s public outcry over the deaths of Blacks and other abuses in encounters with police nationwide.

The Maryland lawmakers spent months working on the legislation in response to George Floyd’s death in police custody last year in Minnesota.

One of the most prominent laws taking effect last Friday creates a unit in the attorney general’s office to investigate all civilian deaths at the hands of police in Maryland. It will have the full investigatory powers of a state’s attorney, including use of a grand jury in any county.

“The only thing that this legislation is trying to do — and this office is trying to do — is to treat the police like everybody else,” said Dana Mulhauser, chief of the Independent Investigations Division in the attorney general’s office. Maryland House Speaker Adrienne Jones, a Democrat who sponsored one of the laws and is the first Black person and first woman to be the state’s House speaker, testified earlier this year about her own experiences with law enforcement, as well as her brothers and two sons.

“Our communities cannot afford to wait for substantive engagement and rebuilding trust in law enforcement,” Jones said in a statement last Thursday. “Independent investigations are an important step to giving the public confidence that justice will be served.” Another law taking effect last Friday will expand public access to police personnel disciplinary records that have been traditionally shielded under the state’s public information law because they were considered personnel files exempt from the law.

“Policing is a public function, and it is only right that disciplinary records are accessible to victims of misconduct and the public,” said Sen. Jill Carter, a Baltimore Democrat who sponsored the legislation. “This is a necessary step to creating transparency and accountability. Police have done a deplorable job policing themselves in secret.”

The law expanding public access to law enforcement records is named after Anton Black, a 19-year-old who died in police custody in 2018 in the rural town of Greensboro on Maryland’s Eastern Shore.

Caylin Young, public policy director of the American Civil Liberties Union of Maryland said the ACLU will help victims’ families get information from past cases under the new law.

“There’s still more work to be done to have true community oversight and for transparency, but indeed these laws are a very significant step in the right direction,’’ Young said. Police advocates say the laws go too far and will lead to unintended consequences, particularly in police recruitment efforts.

Clyde Boatwright, president of the Maryland State Fraternal Order of Police, said no other public employees in the state are subject to the type of scrutiny that police will be under the new law expanding access to records, even when complaints are not sustained. The laws will make the profession more unattractive to younger people, as older officers retire, he said.

“We don’t have people warming up in the bullpen ready to come into the game,” Boatwright said. “It does not exist now because this profession is so unattractive to our young people. This is an all-time low, and every police department is struggling to hire people.”

Police also will be limited in when they can use no-knock warrants in their investigations, under another law taking effect Friday. Police in Maryland will only be able to search someone’s home without notice between 8 a.m. and 7 p.m., except in an emergency.

Maryland has struggled with police accountability problems in recent years. Baltimore’s police department entered into a federal consent decree after a Black man, Freddie Gray, suffered a broken neck in police custody and died, sparking widespread unrest in the city in 2015. Lawmakers approved some police reforms the following year, but critics have said those were not enough.

Calls for Maryland lawmakers to adopt reforms on search warrants also happened in the aftermath of the March 2020 shooting death of a Black woman, Breonna Taylor. She was killed by police in her Louisville, Kentucky, home during a no-knock warrant, her death spurring protests that only intensified after Floyd’s death in May of that year.  The officer convicted of Floyd’s murder has recently signaled he will appeal his conviction and sentence.

Other police reform laws approved in Maryland this year will take effect next year. They include the repeal of job protections in the police disciplinary process. Maryland approved the nation’s first Law Enforcement Officers Bill of Rights in 1974, and about 20 states have adopted similar laws setting due process procedures for investigating police misconduct. Maryland is the first to repeal the law, replacing it with new procedures that give civilians a role in the police disciplinary process.

New use-of-force standards approved by the legislature also will go into effect later, as well as new requirements for most police in the state to use body cameras.