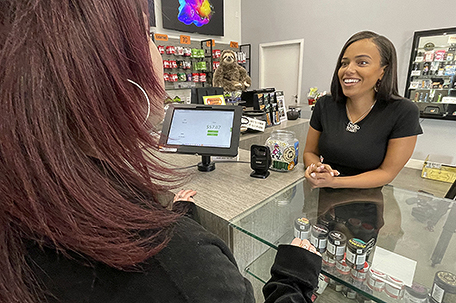 ABOVE PHOTO: Oakland cannabis activist and entrepreneur Evelyn LaChappelle, right, talks to an employee at Blunts and Moore Dispensary displaying her line of cannabis accessories in Oakland, Calif. on Friday, Oct. 7, 2022. While most in the cannabis industry are celebrating President Biden’s announcement pardoning thousands of Americans convicted of marijuana possession, LaChapelle said she has mixed emotions. She’s glad the administration is moving towards decriminalization, but also angry that it came long after she served five years in federal prison for her role in a marijuana distribution operation. (AP Photo/Haven Daley)

While Biden’s executive action will benefit thousands of people by making it easier for them to find housing, get a job or apply to college, it does nothing to help the hundreds of thousands of mostly Black and Hispanic Americans still burdened by state convictions for marijuana-related offenses, not to mention the millions more with other drug offenses on their records.

Advocates for overhauling the nation’s drug laws are hopeful that Biden’s pardons lead state lawmakers to pardon and expunge minor drug offenses from people’s records. After all, they say, dozens of states have already decriminalized cannabis and legalized it for a multibillion-dollar recreational and medicinal use industry that is predominantly white-owned.

“We know that this is really the tip of the iceberg when it comes to people who are suffering the effects of (past) marijuana prohibition,” said Maritza Perez, director of federal affairs at the Drug Policy Alliance, a nonprofit organization pushing for decriminalization and safe drug use policies.

The decades-long “war on drugs,” a sweeping federal legislative agenda that Biden championed as a U.S. senator and that was mirrored by state lawmakers, brought about mass-criminalization and an explosion of the prison population. An estimated tens of millions of people have had a marijuana-related arrest on their record since 1965, the vast majority of them stemming from enforcement by local police and state prosecutors.

But as many law enforcement officials like to point out, the majority of people who serve long sentences for marijuana-related offenses were convicted of more serious charges than possession, such as a weapons count or the intent to sell or traffic the drug on a larger scale. Such factors are typically how a case moves into federal territory versus state prosecution.

Still, reform advocates counter that many of them aren’t violent drug kingpins.

A 2021 Associated Press review of federal and state incarceration data showed that between 1975 and 2019, the U.S. prison population jumped from 240,593 to 1.43 million people. Of them, about 1 in 5 were incarcerated with a drug offense listed as their most serious crime.

The passage of stiffer penalties for crack cocaine, marijuana and other drugs in the 1990s helped to triple the Black and Hispanic incarceration rates by the year 2000. The white incarceration rate only doubled.

And despite state legalization or decriminalization of possession up to certain amounts, local law enforcement agencies continue to make more arrests for drug possession, including marijuana, than any other criminal offense, according to FBI crime data.

“While white and Black and brown people use marijuana at similar rates, Black and brown people have been arrested, prosecuted and convicted at disproportionate rates,” Biden said Thursday. “Just as no one should be in a federal prison solely due to the possession of marijuana, no one should be in a local jail or state prison for that reason, either.”

With the president’s unambiguous acknowledgement of racial inequity in marijuana enforcement, drug law reform advocates and those with convictions now see an opening to push for far more remedies to the harms of the war on drugs.

Weldon Angelos, whose 2003 federal case for selling $300 worth of marijuana to a confidential informant in Utah got him sentenced to 55 years in prison, said he knows many people who will benefit from the president’s pardon. But there are also many more who will not, he said.

“I feel like this is a first step of (Biden) doing something bigger,” said Angelos who, after serving 13 years in prison, received presidential clemency and a pardon during the Obama and Trump administrations. He is now a drug law reform activist.

Felony cannabis cases like his also deserve consideration, Weldon said. Biden’s pardon does not cover convictions for possessing marijuana with an intent to distribute, which could further widen the scope of people receiving relief by tens of thousands.

Enacting a law that clears a person’s federal drug record, similar to what has been offered in nearly two dozen states where marijuana has been decriminalized or legalized recreationally, would make the conviction invisible to companies and landlords doing criminal background checks, he said. Even with the federal pardon, Weldon’s record is still visible, he said.

“There’s a lot more that needs to be done here, if we really want to unwind the effects, and the racist effects, of the war on cannabis,” Weldon said.

Some advocates believe the country should consider clearing more than just marijuana records. In the 1990s, Marlon Chamberlain was a college student in Iowa when he learned that his then-girlfriend was pregnant with his eldest son. He began using cannabis to cope with the anxiety of becoming a young father and, soon after, started selling the drug.

“My thought was that I would try to make enough money and have the means to take care of my son,” said Chamberlain, a 46-year-old Chicago native. “But I got addicted to the lifestyle and I graduated from selling weed to selling cocaine.”

Chamberlain said he had a slew of state charges for marijuana possession between the ages of 19 and 25. But it was a federal case for crack cocaine, in which authorities used his prior marijuana arrests to enhance the seriousness of their case, that upended his life. Chamberlain was sentenced to 20 years in prison before the punishment was reduced to 14 years under the Fair Sentencing Act that narrowed the sentencing disparity between crack and powder forms of cocaine. He was freed after 10 years.

Even though he will not benefit from Biden’s marijuana pardon, Chamberlain sees it as an opportunity to advocate for the elimination of what he calls the “permanent punishments,” such as the difficulties in finding a job or housing that come with having a past drug offense.

“What Biden is initiating is a process of righting the wrongs” of the drug war, he said.

Colorado and Washington were the first states to legalize the recreational use of cannabis in 2012, although medical use had already been legal in several states. According to the National Organization for the Reform of Marijuana Laws, 37 states, the District of Columbia and four U.S. territories now permit the medical use of cannabis. Nineteen states, D.C. and two territories have legalized its recreational use.

And during next month’s midterm elections, voters in Arkansas, Maryland, Missouri, North Dakota and South Dakota will decide whether to permit recreational adult use of cannabis. That is reason enough for every state to look into mass-pardons and expungements, civil rights leaders say.

“How fair is it that you will legalize marijuana now, tax it to use those state taxes to fund government, but forget all the people who are sitting in jails or were incarcerated when it was illegal?” NAACP President Derrick Johnson told the AP. “All those individuals who have been charged with marijuana crimes need to be pardoned, particularly those in states that have legalized marijuana.”

Richard Wallace, executive director of Equity and Transformation, a social and economic justice advocacy group in Chicago, said state pardons must also come with some form of restitution to those who suffered economically under the racially discriminatory drug war.

“We need to be thinking about building out durable reparations campaigns centered around cannabis legalization,” he said. “I think oftentimes we end up just fighting for the pardons and the expungements, and we leave out the economic component.”