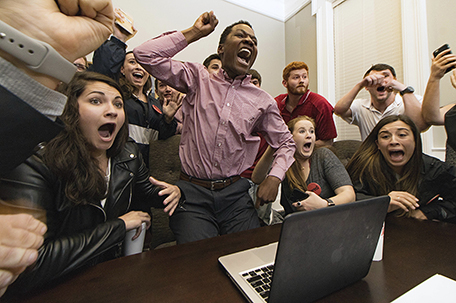 ABOVE PHOTO:  Jared Hunter, center, and his campaign staff react to his election as student body president at the University of Alabama in Tuscaloosa, Ala., on Tuesday, March 7, 2017. Originally from Wetumpka, Ala., Hunter is the first black student to win the position with the backing of a secretive group called The Machine, which is composed of the school’s most prestigious, historically white fraternities and sororities (Jacob Arthur/Alabama Crimson White via AP)

TUSCALOOSA, ALA.–Someone like Jared Hunter was impossible to imagine even a few years ago at the University of Alabama.

A preppy Black guy who grew up outside a small town near Montgomery, Hunter not only is the first member of a prestigious, all-white fraternity, Theta Chi, but he has black female friends who are officers in previously all-white sororities. This, at a campus where Greek-letter social groups were racially segregated until protests upended the old system in 2013.

To top it off, the 21-year-old junior this week became the first Black person elected student government president at Alabama with the backing of a secretive, White-controlled campus society called The Machine. Think of Yale University’s “Skull and Bones,’’ but with top-notch football and tailgating.

Two other Blacks have been elected Student Government Association president at Alabama, but not with the blessing of The Machine, a notorious group blamed for social blackballing, vote-buying, vandalism and worse through the years. Hunter, a political science major and aspiring lawyer, discussed the election in an interview with The Associated Press at his white-columned fraternity house on University Boulevard:

AP: By all accounts you are the first Black candidate at Alabama to receive the endorsement of The Machine. How did that happen?

Hunter: Word got around that I was interested in running and one of my fraternity brothers approached me saying that my name had been in the running for backing from Theta Nu Epsilon, or The Machine. … Later I found out I had received the support, which was pretty cool. I was pretty excited. You know, everybody knows the history of The Machine, and that includes a lot of dark and terrible things and allegations, but you can look at maybe the last 10 years and see how many Machine-affiliated campaigns have won.

AP: You had some real misgivings about whether to accept the Machine endorsement. Tell me about that dilemma.

Hunter: Deliberating whether or not I was going to accept The Machine’s endorsement was one of the most difficult decisions I’ve ever had to think about. Knowing that they have a pretty awful history here at the university with tons of alleged attacks or whatever it may be on students or other candidates. But ultimately, I realized that the campaign that I had begun bringing into fruition was my own. The ideas I created were my own, and the campaign staff that I was able to assemble was my own. And I wasn’t going to let anyone influence the decisions I made or the pledges to serve all students.

AP: You wrote an article for The Huffington Post about being a Sperry-wearing, African-American man in a white fraternity. It starts with the line: “I would like to think that I am black,’’ and goes on to talk about straddling that line between black society and white society. Why is that so difficult?

Hunter: For me it never really was. I think it was more so the interpretations, the judgments of other people outside of who I was. Growing up I’ve always been the person that … dealt with the “You talk White’’ or “You sound White,’’ “You dress White,’’ “Why you sound like that?’’ from literally everyone it seems. … That’s my interpretation and that’s my representation of being Black (and) I think a lot of people whether you’re White or Black maybe is not as identifiable as other stereotypes would be.

AP: You say race wasn’t an issue in this campus election. Why do you think it wasn’t?

Hunter: I think because it’s such a delicate topic to begin with. Also, there was so much else that was brought up and discussed in this election that I’m not even sure there was room for an additional controversy to jump into the fray. But I think the fact that I was a black man supported by The Machine was something that was just completely different.

AP: Do you think your election and the way you were elected means that it’s time to stop talking about race and the University of Alabama in the same sentence? Is it just not an issue here anymore?

Hunter: It’s definitely still an issue, and hopefully through me being elected and also through the administration I plan to run we can begin to bridge some of those gaps. Yes, there are a lot of inequities felt by marginalized groups on campus.