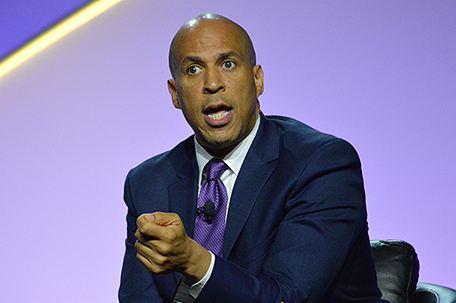 The plan would help HBCUs to continue providing a world class education and to upgrade their facilities.

Booker’s campaign is focused on creating opportunity for all Americans — especially communities that have been left out and left behind, like communities of color that have for centuries been deprived of wealth, opportunity, and their voices as citizens.

It is imperative that America’s HBCUs and MSIs are well-funded, affordable, and continue to deliver opportunity for Black and Brown Americans, he believes.

Booker’s mother is a graduate of Fisk University, and his father, born into poverty and raised by a single mother, graduated from North Carolina Central University after members of his church sent around a collection plate to help him pay for his first semester.

“HBCUs make our country stronger and more reflective of the diversity that makes us so great,”  Booker said. “I am here today because of the power of these institutions to uplift and bring about opportunity to Black Americans. As president, I will redouble our efforts to support and invest in HBCUs across the country — my mother and father wouldn’t have it any other way.”

The role HBCUs have played in Booker’s life is not unique. More than one in five Black Americans with a bachelor’s degree received it from an HBCU. HBCUs are responsible for educating a majority of all Black teachers, doctors, judges, and engineers. Despite these contributions, they are challenged by significant under-investment and, as a result, endowments at HBCUs are at least 70% smaller than endowments at non-HBCUs.

Booker’s plan for HBCUs and MSIs would:

•   Build on the investments of the Future Act by investing an additional $30 billion in competitively-awarded grants by the Department of Education to enable HBCUs and MSIs to expand and improve STEM education and help with recruitment, retention, and graduation rates. Importantly, an investment of this scale would provide schools the security of funding for years to come, avoiding a situation where STEM funding for HBCUs can be held hostage by Congressional Republicans seeking leverage to push their legislative agenda.

•   Provide $30 billion in grants to upgrade infrastructure, including facilities and technology, at HBCUs and MSIs to ensure all students have access to a world-class education in world-class facilities.

•   Put HBCUs at the center of the fight against climate change. Cory will require that at least 10 percent of his $400 billion 50-State Climate Moonshot Hubs are based in HBCUs and MSIs. Each hub would be focused on reasserting our global leadership in Research and Development (R&D) and leading the way in tackling the most important challenges in basic science, applied research, manufacturing, and commercialization.

•   Sign into law the Parren Mitchell Minority Business Education and Empowerment Act, a bill proposed by former Rep. Elijah Cummings that would require the SBA to collaborate with HBCUs to establish Small Business Development Centers and develop entrepreneurship curricula.

•   Fight to pass the HBCU PARTNERS Act, which would direct federal agencies to make a concerted