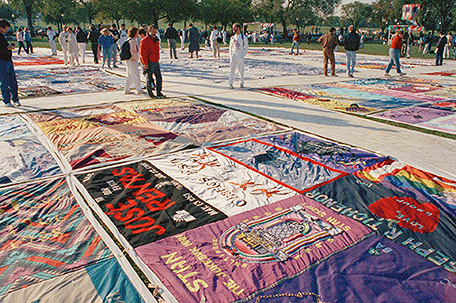 ABOVE PHOTO: A massive quilt memorializing victims of AIDS is displayed on the Ellipse in Washington, D.C., Oct. 8, 1988. Some 8,288 names are embroidered and painted on the quilt’s panels. The Washington Monument can be seen in the background. (AP Photo/Charles Tasnadi)

“Forty years ago today, five young men in Los Angeles were confirmed as the first known patients stricken with an illness that the world would later come to know as AIDS. In the decades since, more than 700,000 Americans and 32.7 million people worldwide have been lost to AIDS-related illnesses – a heartbreaking human toll that has disproportionately devastated LGBTQ+ communities, communities of color, and underserved and marginalized people around the world.

On the 40th year of the HIV/AIDS epidemic, we remember the lives that were cut short by this terrible disease – including so many whose pain went unacknowledged for far too long. We also celebrate the resilience and dignity of the over 38 million people worldwide, including approximately 1.2 million Americans, living with HIV.

Thanks to the tireless dedication of activists, scientific researchers, and medical professionals, we have made tremendous progress to advance HIV research, prevention, treatment, and care. And after years of neglect, discrimination, fear-mongering, and limited action by government officials and the public, America has grown to become a leading force in the fight to end the HIV crisis. Through the President’s Emergency Plan for AIDS Relief – and as the largest donor to the Global Fund to Fight AIDS, Tuberculosis, and Malaria – the U.S. has invested more than $85 billion since 2002 to support HIV programs around the world, including $250 million provided in my American Rescue Plan to address the impacts of COVID-19 on our progress in the fight against HIV. All told, these efforts are estimated to have saved more than 20 million lives globally. To help accelerate and strengthen our efforts to end the HIV epidemic in the United States, I have requested $670 million from Congress, an increase of $267 million over previous levels, to aggressively reduce new HIV cases by increasing access to treatment, expanding the use of preexposure prophylaxis (PrEP), and ensuring equitable access to services free from stigma and discrimination.

Despite the progress we’ve made, our work is not yet finished. In honor of all those we have lost and all those living with the virus – and the selfless caregivers, advocates, and loved ones who have helped carry the burden of this crisis – we must rededicate ourselves to reducing HIV infections and AIDS-related deaths. We must continue empowering researchers, scientists, and health care providers to ensure equitable access to prevention, care, and treatment in every community – particularly for communities of color and the LGBTQ+ community. And we must provide moral leadership to eradicate the stigma and discrimination still faced by those living with HIV, rededicating ourselves to continuing the vital work of ending this epidemic once and for all.”