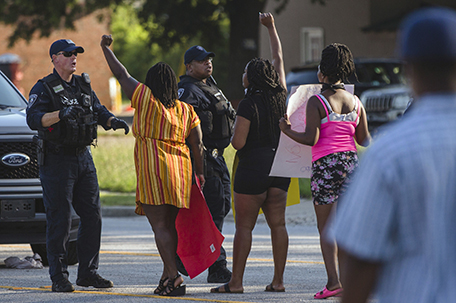 ABOVE PHOTO: Brittany Martin, second from left, wearing striped clothing, confronts police before demonstrators in support of George Floyd march with an escort around downtown Sumter, S.C., on May 31, 2020. Martin, a pregnant Black activist serving four years in prison for her behavior at racial justice protests, is scheduled to have her sentence reconsidered as she struggles to reach her due date behind bars. (Micah Green/The Item via AP)

COLUMBIA, S.C. — A pregnant Black activist serving four years in prison for her behavior at racial justice protests will have her sentence reconsidered as she struggles to reach her due date behind bars.

Raising questions about free speech and equal justice, Brittany Martin, 34, was found guilty this spring of breaching the peace in a high and aggravated manner over comments she made to police. Her lawyers have been pushing for a lesser sentence amid increasing concerns about her health and that of her baby, due in November.

Advocates with Black Voters Matter have been circulating a petition calling for her release. Civil rights attorney and former state lawmaker Bakari Sellers will tell the judge on Sept. 12 that the punishment is unjust.

“She’s in jail because she talked in America,” said Sybil Dione Rosado, her trial attorney. “She’s a dark-skinned Black woman who is unapologetically Black and radical.”

Martin moved with her four younger children to Sumter, South Carolina, from Iowa in spring 2020 and was “ready to go and protest” after the police killings of Breonna Taylor and George Floyd sparked a nationwide movement that year, her sister said.

But Martin also had someone else on her mind: In 2016, Sumter police fatally shot her brother-in-law 19 times when officers said he fired a gun after a chase in a stolen car. When she took to the streets, she carried grief over her family’s past.

In court, prosecutors presented police body camera recordings including snippets of those demonstrations. Shared with the AP, they don’t show her laying hands on any officers. Videos from May 31, 2020 show Martin chanting “No justice, no peace,” in an officer’s face. Police donned riot gear and discussed using tear gas before letting the crowd disperse.

The jury acquitted Martin of inciting a riot and reached no verdict on whether she threatened officers’ lives. Her legal team was “elated” when jurors found her guilty only of breaching the peace, punishable by no more than a $500 fine and 30 days in jail, investigator Tony Kennedy recalled.

State law defines breachers of the peace as any disturbers, “dangerous and disorderly persons” or people who utter “menaces or threatening speeches.” But prosecutors presented the charge as a “high and aggravated” crime, which carries up to 10 years imprisonment. Rosado said Judge Kirk Griffin did not allow her to explain the distinction, and the possibility of a much stiffer penalty, to the jury.

Prosecutors did not respond to interview requests. Sumter police said it would be inappropriate to comment, given the potential for additional action.

Sellers called the sentence “beyond the pale.”

“The fact is you have people who stormed the Capitol, who led to the death of law enforcement, who tried to overturn an election and fracture democracy. And they’re getting two months, three months, six months,” Sellers said. “And Brittany Martin gets four years.”

Of the roughly 850 people charged with federal crimes related to the Jan. 6 insurrection, more than 330 have pleaded guilty to receive lesser sentences, mostly misdemeanors punishable by no more than a year.

In a court filing, Sellers points to others convicted under the same charge who had their sentences reduced. A more high-profile case involved an intoxicated University of Alabama football fan who punched a University of South Carolina fan unconscious after the Gamecocks upset the Crimson Tide. The man was pronounced dead after a motorist unknowingly drove over his body. The fan got three years in prison, the rest of his 10-year sentence suspended.

Martin said her body “can’t get comfortable with the baby” and as of July, she lost 12 pounds while incarcerated, despite the pregnancy. She was taken twice by ambulance to a hospital that month, once after experiencing contractions and again after entering preterm labor at 25 weeks, according to her sister Whitney Martin and Rosado. Martin’s prison report shows she went to eight outside medical appointments throughout July and August.

Martin recently got sent to solitary confinement for refusing to cut her dreads, a violation of a policy Rosado called “racially biased.” According to the grooming policy, which seeks to “promote safety,” the prison allows neatly braided, corn-rowed hair only when worn straight back and individual braids but not dreadlocks or twists.

Martin said she’s been verbally harassed by guards and injured by inmates. Rosado reported seeing scratches on Martin’s face and a bloody right eye during a recent visit. Martin’s prison report shows she was sent to detention for 35 days on June 5 over threatening to inflict harm on an employee and again for 22 days on July 28 over refusing or failing to obey orders.

National Racial Justice Network President Dr. Candace Brewer wants to ensure Martin “does not end up where Sandra Bland” did, referring to the Black Chicago woman who died in a Texas jail after a trooper said she failed to signal a lane change.

A lot changed during the two years since the protests.

In November 2020, Martin received 7 years probation for willful intent to injure and leaving a crime scene in Iowa, where in August 2019, her teenage son had accused her of purposely hitting him with her SUV and driving away. Iowa court documents allege that Martin told her son — who wound up hospitalized with minor injuries — that she hoped he would die. Rosado said the South Carolina judge — who did not respond to an interview request — did not mention the Iowa conviction in his sentencing decision.

This January, Martin’s 18-year-old son was shot and killed in his car outside a Waterloo, Iowa convenience store — a loss Martin and her family are still mourning.

Martin’s sister has been caring for the younger children, who she said are “missing their mom.” The 5-year-old hasn’t sounded like his happy self on the phone, Martin said.

“It’s been times in this prison where I have started giving up for a second, mentally and emotionally,” Martin said. “It seemed like the Holy Spirit just put that spoon in my mouth, like ‘Come on, you’ve got to eat. You’ve got to get up.’”