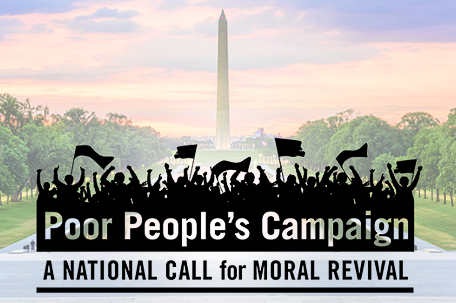 On June 20, poor and low-income people of every race, creed, color and sexuality from more than 40 states will demand change as they share stories of struggling through poverty and protests for racial justice at a historic digital assembly and march sponsored by The Poor People’s Campaign: A National Call for Moral Revival. Hundreds of mobilizing partners — including 14 national unions, 16 national religious denominations and dozens civil rights organizations — will join the campaign for the Mass Poor People’s Assembly and Moral March on Washington.

“When we began organizing the poor people’s assembly and march two years ago, we knew 140 million people — 43% of the nation  were poor or low-income and that 700 people died each day — or 250,000 a year — from poverty,” Rev. Dr. William J. Barber II, president of Repairers of the Breach and co-chair of the Poor People’s Campaign, said.

“We knew racist voter suppression was blocking voters from casting their ballot and blocking  progressive policy decisions,” Barber continued. “We knew over 80 million people were uninsured or underinsured and millions were homeless and without clean water. And we knew that we had a war economy with a gross and unnecessary budget. We knew all of these realities are morally indefensible, constitutionally inconsistent and economically insane, undermining our national health.”

“And then a pandemic hit and exposed the wounds of racism and poverty, and a lynching by police of a Black man on camera poured salt in the wound, which makes our call for a moral fusion coalition of all people to address five interlocking injustices even the more relevant,” Barber concluded.

Former Vice President Al Gore and other young climate activists will introduce those testifying about the effect of ecological devastation on their lives.

The campaign notes that the day’s focus will be on poor and low-income people who demand that their voices be heard. These people from 43 states — white farmers and coal miners standing with Black women Latino meat packers, First Nation Apaches and Asian people — will tell the pain of their stories and demand a specific policy, moral budget and political agenda.

That agenda includes a demand that the nation address the five interlocking injustices of systemic racism, systemic poverty, ecological devastation, the war economy and militarism and a distorted moral narrative of religious nationalism.

Among the impacted people who will speak are service workers from the Midwest who have worked through the pandemic without PPE; families hurt by police brutality; a coal miner from Appalachia; mothers who have lost children due to lack of health care, residents of Cancer Alley in Louisiana, and an Apache elder who is petitioning the federal government to stop a corporation from destroying a sacred site in Arizona.

The assembly and march are being held in the wake of protests spurred by the death of George Floyd, who died on Memorial Day as a Minneapolis police officer held his knee on Mr. Floyd’s neck for 8 minutes and 46 seconds.

His cry of “I can’t breathe” echoed that of Eric Garner, who died in 2014 when a New York City police officer put him in a chokehold. It followed those of Breonna Taylor, who was shot eight times by officers who invaded her apartment in Kentucky with a battering ram, and Ahmaud Arbery, who was killed by two white joggers who weren’t charged until a video emerged.

The campaign’s leaders decided at the end of March to hold a digital assembly and march because of the pandemic rather than gathering in person in Washington, D.C. Amidst protests that are happening in every state, this digital mass assembly presents an opportunity for all Americans to join together in a united call for justice from wherever they are.