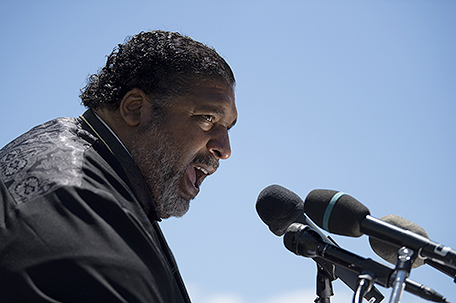 ABOVE PHOTO: Bishop William J. Barber II speaks at the Moral March on Manchin and McConnell, a rally held by the Poor People’s Campaign, calling on them to eliminate the legislative filibuster and pass the “For The People” voting rights bill, outside the Supreme Court in Washington on Wednesday, June 23, 2021. (Photo by Caroline Brehman/CQ Roll Call via AP Images)

In a message to the nation delivered on Monday, moral and faith leader Bishop William J. Barber II, DMin, announced that the Poor People’s Campaign and its major partners are launching a season of nonviolent direct action to push the U.S. Senate to protect democracy.

The Senate must end the filibuster; protect and expand voting rights and pass a minimum wage of $15 an hour, and do it all by Aug. 6, the 56th anniversary of the signing of the Voting Rights Act in 1965,” Barber said in a message entitled “Democracy vs. Autocracy.”

“There’s no time to waste,” Barber said in his prepared remarks. “Democracy vs autocracy is the battle of our time. We must escalate the nonviolent moral struggle for a Third Reconstruction.”

When our predecessors “faced trying times, they met the challenge by recognizing that urgency demands action. We cannot back down.

We cannot compromise. We must act now,” said Barber, who also is president and senior lecturer of Repairers of the Breach.  The Poor People’s Campaign: A National Call for Moral Revival will lead the way with a series of Moral Mondays, but also invites others to join.

The time is now for this “loving militancy,” Barber said.

“We cannot declare the immoral reality that democracy is in peril and then not engage with the moral challenge of nonviolent direct action,” he said.

The Moral Monday schedule is:

• July 12: A massive national call-in to every senator, to shut down the switchboards if necessary.

• July 19: The anniversary of the Women’s Convention at Seneca Falls, nonviolent moral direct action in DC led by women from all over the country.

• July 26: In all Senate offices, regardless of party, people in at least 45 states, will engage in nonviolent moral direct action.

• August 2: Nonviolent moral direct action focused on the US Senate and led by a mass number of clergy and religious leaders with poor and low-wage workers.

“If our actions result in the system believing it has to arrest us, then so be it. Civil disobedience is a badge and banner we will proudly wear,” Barber said.