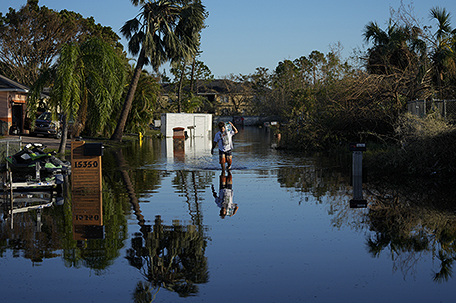 HARLEM HEIGHTS, Fla. — The Gladiolus Food Pantry usually hands out supplies on Wednesdays to about 240 families, so when Hurricane Ian swept through that day and canceled their distribution, it was left full of flats of canned black beans, bags of rice, meats, bread and produce — food that helps families struggling with rising rents and inflation make ends meet.

By the weekend, much of that food was in the garbage, the floors were still wet and muddy from the floodwaters that had filled the room, and the pantry’s founder and director, Miriam Ortiz, was worried about what would become of her neighborhood as she worked to get the pantry she started nine years ago up and running again.

Ortiz said the food pantry’s green building is the heart of the Harlem Heights neighborhood, a small, mostly Hispanic community of nearly 2,000 people near Fort Myers that was hammered by the Category 4 hurricane. A sign scrawled on a piece of roofing that had torn loose advertised free food, diapers, wipes, body wash and toothpaste.

The wind, rain and storm surge that accompany hurricanes affect everyone in their path. But those combined effects are often more of a disaster for poor people living day to day, like many in Harlem Heights, where the median income is a little under $26,000, according to U.S. Census data.

Many are hourly workers with little savings for things such as evacuation hotel stays or money to tide them over until their places of employment reopen. In a tourism heavy economy like South Florida’s, the wait for hotels to reopen and visitors — along with the jobs they bring — to return can be long and agonizing.

Ortiz said many of the clients she was seeing every week before the hurricane were already hurting from the skyrocketing cost of food and housing. Rising rents had forced many young adults that had been living on their own to move back in with parents and grandparents, she said.

Over the weekend, cars and trucks whizzed down the neighborhood’s main road, which was dry and had been swept free of tree limbs and palm fronds. That wasn’t the case on many side streets, many of which were still submerged in water as residents hauled waterlogged furniture to the curb.

At Maria Galindo’s apartment, the water had risen to about hip height and the wind had ripped off part of her roof while she and her 9-year-old daughter, Gloria, were terrified inside. Her daughter said that during the storm, she kept thinking she wanted to return to her native Guatemala.

“We did not know where to go, where to grab onto, whether here or there because of the rain, the wind, the water. … It was very difficult,” said Maria Galindo, speaking in Spanish.

They and their neighbors were trying to salvage what they could and to push the water from their waterlogged apartments. Wet clothes hung from a clothesline outside, while inside a thin seam of light coming between the wall and ceiling showed where the roof had been lifted.

Galindo works as a housekeeper at a local hotel, but it’s closed until further notice. She’s worried for her family and her daughter and wondering how she’ll make ends meet.

“We are without a roof overhead. We need food. We need money to buy things,” she said. “We need help.”

Back at the food pantry, people had been delivering donations of food, cleaning supplies and clothing throughout the day Saturday, and a volunteer had set up a tent and was cooking food for people.

One of those who dropped by to deliver supplies was a frustrated Lisa Bertaux, who came with her friend. She ticked off the items that people needed: toothbrushes, deodorant, cleaning supplies, paper towels, children’s clothes, and wipes. And the list went on.

“There is so much need here. … There’s very little food coming in so far. There’s a great need,” she said. “It’s time for us to rebuild our community.”

One of those coming by to pick up supplies was Keyondra Smith, who lives down the street in an apartment complex with her three kids. She had parked her car in a different area so that when the floodwaters came sweeping through, she didn’t lose it. Her neighbors weren’t so lucky, as cars floated through the parking lot during the worst of the flooding and the people who lived on the first floor — she’s on the second — were completely flooded out.

Smith had been driving by the food pantry when she noticed it had supplies so she stopped to pick up some toilet paper, water, and hot plates of food. Before that, her family had been eating raviolis out of a can, Vienna sausages and snacks from a local convenience store.

“We don’t have any water. My food is spoiling in the refrigerator,” she said. Though she can drive to the few stores that are open, she said they are only taking cash and many of the ATMs aren’t working. “I have three kids, so I have to get some supplies to feed them.”

Irma pushes Florida’s poor closer to the edge of ruin