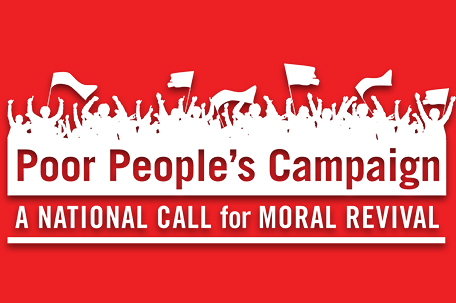 During the rally, the Rev. Dr. William J. Barber II — president and senior lecturer of Repairers of the Breach and co-chair of the Poor People’s Campaign: A National Call For Moral Revival — read aloud the text from a detailed letter sent to Manchin, which included next steps in the ongoing struggle to pass crucial legislation that the senator has come out on record as opposing and negotiating in bad faith.

“By obstructing the Build Back Better Act, living wage legislation, voting and immigrant rights protection, you have been downright abusive to poor and low wealth people in the country,” Barber said. “You have blocked investment in our daily lives and prevented legislation to secure the infrastructure of our democracy. …We are not going to stop fighting to expose what you are doing and who it is hurting. In the new year, on January 7, we are committing to begin a new season of non-violent intensification of multiple forms of direct action, led by poor and low wealth people alongside religious leaders.”

During the rally, many speakers committed themselves to the upcoming action and called Manchin’s actions towards the American people — especially to his own constituents, several who were part of the discussion — abusive. Yet, they are all in for the long haul.

Jayapal emphasized that the timing of the press conference underscored the fact that the struggle never takes a holiday. People need action now, she said.

Denita Jones, chair of the Texas Poor People’s Campaign said that her strong faith has sustained her, especially through the duel crisis brought on by the pandemic and the devastating snowstorm and power outages last winter in Texas. She drew a verbal line in the sand regarding Manchin’s lack of action and recalcitrance.

“You are my oppressor, and as such, it is my duty as an impacted person to tell you,” Jones said. “We refuse to accept that there is no room in this democracy for the Build Back Better agenda when the Senate passes a $778 billion war budget that is four times as expensive. We will continue to shout from the rooftops and every valley that there is room for democracy and the oppressors will not win.”

Many clergy members participated in the rally. Reverend Dr. Beth Johnson, co-chair of the Unitarian Universalist Association, poor people’s campaign Leadership Council, representing over 1,000 congregations, was one of them. She referenced recent alleged private remarks made to colleagues by Manchin in a story first reported by the Huff Post that he thought parents would waste monthly child tax credit payments on drugs.

“I’m here to say Joe Manchin, we refuse your narrative,” Johnson said. “We refuse to accept that there is no room in democracy, when there are 17 million low wage workers who would have qualified for the expanded Earned Income Tax Credit. We refuse the contemptuous narrative that people do not deserve the funds to live with even a modicum of the wealth that you possess, and refuse [your] cynical view of people that says they cannot be trusted with even the barest necessary income. As a pastor, I know that I have to love the people. As a Senator, you have to represent the people, not be an enemy to the people, yet there seems to be no room in your heart — no room for poor people, no room for children.”

The letter in its entirety can be viewed here: https://actionnetwork.org/petitions/senator-manchin-we-refuse-to-accept-theres-no-room-in-the-democracy-for-all.

Sen. Manchin: Why be a slave to corporations rather than be free to serve your people?’ asks the Poor People’s Campaign