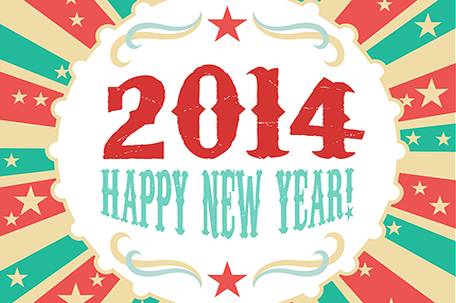 WASHINGTON— Ready to ring in the new year, Americans look ahead with optimism, according to a new AP-Times Square New Year’s Eve poll. Their ratings of the year gone by? Less than glowing.

On the whole, Americans rate their own experience in 2013 more positively than negatively, but when asked to assess the year for the United States or the world at large, things turn sour.

—The public splits evenly on how the year turned out for the country, 25 percent saying it was better than 2012, 25 percent saying it was worse. As with most questions about the state of affairs in the U.S. these days, there’s a sharp partisan divide. Democrats are more apt to say the U.S. turned out better in 2013 than 2012 (37 percent) than are Republicans (17 percent).

But the outlook for the new year is positive: 49 percent think their own fortunes will improve in 2014, 14 percent are anticipating the new year to be a downgrade from the old. Thirty-four percent say they don’t expect much to change.

Most Americans — 54 percent — say they’ll be ringing in the new year at home, while 1 in 5 are heading to a friend’s or family member’s house. Only 8 percent say they’ll go to a bar, restaurant or other organized event.

—Younger Americans are least apt to spend the holiday at home: 39 percent of those under age 30 will celebrate at home, 33 percent at someone else’s home, 13 percent at a bar or other venue.

—Regardless of their own time zone, nearly 6 in 10 say they’ll watch at least some of the celebration from New York City’s Times Square.

Wherever they’re spending the holiday, most Americans prefer the company of family. Asked with whom they want to be when the clock strikes midnight, 83 percent name a family member.

—Less conventional choices: 2 percent cite their pets, 3 percent God, Jesus or their religious congregation, and less than 1 percent said they wanted to ring it in with their co-workers.

—Of course, some opt out altogether: 18 percent say they’re not planning to celebrate on New Year’s Eve, and 9 percent say there’s no one with whom they’d like to party, preferring instead their pillow, TiVo or their own thoughts.

WHAT MATTERED IN NEWS

The implementation of the health care law topped the list of the most important news stories of 2013, with 26 percent citing it. In an Associated Press survey of news directors and editors, 45 of 144 journalists surveyed called the health care rollout their top story.

In the AP-Times Square poll, the death of Nelson Mandela occurred as the poll was underway. It rose quickly, with 8 percent naming it as the most important news of the year, matching the share citing the federal government’s budget difficulties or shutdown.

The budget fight, which led to a partial shutdown of the federal government in October, was rated extremely or very important by 60 percent of Americans, and prompted rare bipartisan agreement. About two-thirds in each major party, 65 percent of Republicans and 63 percent of Democrats, rated it highly important.

A majority said the Boston Marathon bombings were extremely or very important, and 47 percent considered the national debate over gun laws that important.

Miley Cyrus’s MTV Video Music Awards performance. The launch of “Lean In.” Apologies from Paula Deen and Lance Armstrong. Walter White’s exit and the entrance of the Netflix series “House of Cards.” What do they all have in common? More Americans say these pop culture moments were more forgettable than memorable.

Just one pop culture moment was deemed more memorable than forgettable: The birth of Prince George to Britain’s Prince William and his wife, Kate.

—Among men, 64 percent called the debate on work-life balance sparked by the book “Lean In” and other writings forgettable. About half of women agreed.

—About 1 in 5 younger Americans said the launch of original programming through streaming services like Netflix or Hulu was a memorable moment, about doubling the share among those age 50 and up.

—Residents of the West were more likely than others to consider memorable the San Francisco “Batkid” (31 percent) or the final season of the series “Breaking Bad” (19 percent).