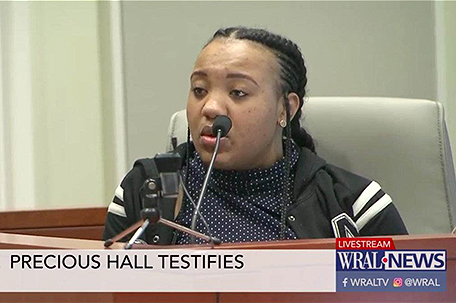 PHOTO: Precious Hall is a registered voter and a victim of the #NC09 scheme. Hall received an absentee ballot but did not remember requesting one. She normally votes in person. People showed up at her home, she completed ballot, people witnessed it, and they took the ballot with them. (Twitter video grab: Courtesy Kristen Clarke, JD)

Republicans are accused of trying to steal an election.

RALEIGH, N.C. — The North Carolina political operative at the center of a ballot fraud scandal was arrested Wednesday on criminal charges over his collection of absentee ballots in the 2016 elections and the Republican primary in 2018, a state prosecutor said.

Following that decision, Harris announced Tuesday he would not run in a new election.

Dowless was charged in grand jury indictments alleging illegal possession of absentee ballots, obstruction of justice and conspiracy to obstruct justice. North Carolina law makes it illegal for anyone other than the voter or a close relative to handle a mail-in ballot.

The alleged criminal acts “thereby served to undermine the integrity of the absentee ballot process and the public’s confidence in the outcome of the electoral process,” the indictments said.

Also charged were people Dowless allegedly paid to collect ballots during the spring of 2018, when Dowless and his team were being paid by Harris’ campaign, and in the 2016 general election, when Dowless himself ran for a local soil and water conservation post.

In 2016, Dowless paid people to visit Bladen County voters and collect absentee ballots from them, a potential felony under North Carolina law, state elections board investigators said in a January 2018 report. “Workers employed by Dowless were required to hand-carry the ballots to Dowless in order to be paid,” the report said.

Freeman said court hearings in the criminal case will be scheduled during the last week of March in a Wake County court.

Freeman also is looking into irregularities uncovered during November’s general election. Freeman said the elections board’s findings on that case are being forwarded to state criminal investigators to be reviewed in the coming weeks.

Dowless did not respond to phone and text messages Wednesday. A woman hung up on a reporter’s call to Dowless’ attorney, Cynthia Singletary.

A phone listing for co-defendant Caitlyn Croom in Elizabethtown rang unanswered Wednesday and an email address listed in public records search bounced back a reporter’s email.

According to evidence presented at last week’s elections board hearing into the 2018 congressional contest, Dowless conducted an illegal “ballot harvesting” operation in which he and his assistants gathered up absentee ballots from voters by offering to put them in the mail.

Dowless’ workers in rural Bladen County testified that they were directed to collect blank or incomplete ballots, forge signatures on them and even fill in votes for local candidates.

Harris narrowly led Democrat Dan McCready in the 9th congressional district race after November’s election, but the state elections board twice refused to certify the Republican as the winner due to the potential ballot fraud. McCready has said he will run again.

Harris ultimately testified last week that he thought the election was sufficiently tainted that he, too, thought a new election was necessary.

The elections board hasn’t set a date for new elections in the 9th district.

Harris, who hasn’t been criminally charged, has denied knowledge of any illegal practices by those involved with his campaign, but he could come under legal scrutiny. Among the revelations during last week’s state board hearing, Harris admitted during testimony that he wrote personal checks to Dowless in 2017, a potential legal violation if they weren’t reported by his campaign.