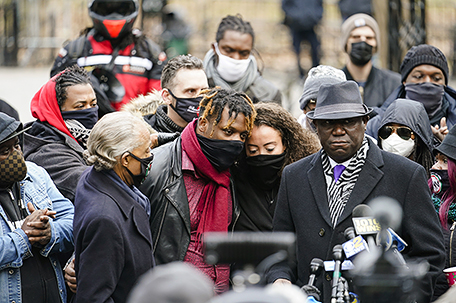 NEW YORK — Police have released a new video clip showing a woman trying to tackle a Black teenager after falsely accusing him of stealing her phone at a New York City hotel.

The New York Police Department asked the public to help locate the woman without identifying her beyond calling her a suspect in an “attack” late last week. Police said on Thursday that she’s still being sought on possible assault charges stemming from an altercation that’s prompted accusations of racial profiling. The uproar began when Keyon Harrold, a prominent jazz trumpeter, posted a video on social media of the confrontation Saturday at the Arlo Hotel. He said the woman scratched him and tackled and grabbed his 14-year-old son, Keyon Harrold Jr., at the lower Manhattan hotel where the pair were staying.

Harrold said the phone was returned by an Uber driver shortly afterward.

The father’s widely watched video shows an agitated woman demanding her phone be returned while a hotel manager tries to settle the situation. At one point, the woman appears to rush forward and says, “I’m not letting him walk away with my phone.”

The new security video from police more clearly shows the woman frantically chasing down the teen as he tried to exit the hotel’s front door. She’s seen grabbing him from behind before both tumble to the ground. The video was featured in a tweet by NYPD Chief of Detectives Rodney Harrison that included a close-up photo of the woman labeled “WANTED.”