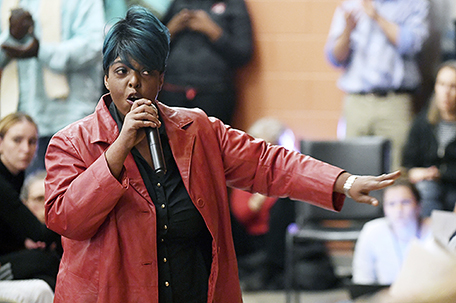 ABOVE PHOTO:  In this Wednesday, March 7, 2018 photo, DeLores Venable addresses Asheville Police Chief Tammy Hooper during the Asheville Citizens Police Action Committee meeting at the Dr. Wesley Grant Sr. Southside Center in Asheville, N.C. The FBI is probing the Aug. 25, 2017 beating of a black man by a white police officer as anger mounts about the handling of the case. The FBI’s involvement was confirmed by state law enforcement officials on Wednesday night after the start of the community meeting on the topic. The officer involved resigned in January. (Angela Wilhelm /The Asheville Citizen-Times via AP)

RALEIGH, N.C.  — A White police officer shown on video beating a Black pedestrian has been charged with felony assault in a North Carolina case that sparked outrage over use of excessive force.

The case against former Asheville Police Officer Christopher Hickman stems from an August 2017 encounter but became public only last week after a leaked body camera video showed Hickman subduing and punching the pedestrian, who was accused of jaywalking.

The violent encounter happened shortly after Asheville implemented rules against excessive force, demonstrating how even a well-meaning policy can be limited by the officers carrying it out. The delay in making the footage public also shows that body camera technology being adopted across the country can’t always guarantee the level of transparency many have hoped for.

“We need to be very cognizant of how difficult police supervision actually is. It’s difficult enough that we can’t just throw a piece of technology at it and expect to substantially change police supervision,” said Seth Stoughton, who teaches law at the University of South Carolina.

Hickman, 31, was arrested late Thursday on a felony charge of assault by strangulation, plus misdemeanor counts of assault and communicating threats, according to the prosecutor. A phone listing for Hickman, who resigned in January, had a full inbox that wouldn’t take messages.

The Aug. 25 encounter came months after the city implemented the use-of-force policy that included training on de-escalating tense situations. The policy was drafted in the aftermath of a White officer killing an armed Black man after a high speed chase. 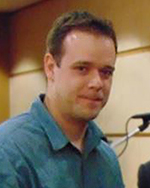 Former Asheville police officer Chris Hickman. His body camera recorded him beating a black pedestrian he accused of jaywalking has been arrested on assault charges. Hickman was charged late Thursday, March 8, 2018, with assault by strangulation, assault inflicting serious injury and communicating threats, according to the Buncombe County District Attorney’s Office. (City of Asheville, N.C. via AP)

Despite the policy, Hickman was shown on video published last week by The Citizen-Times subduing Johnnie Jermaine Rush, then punching and shocking him with a stun gun. Rush was stopped on a dark street because officers accused him of crossing outside a crosswalk near a minor league ballpark and cluster of breweries popular with tourists.

An arrest warrant for Hickman said Rush, 33, suffered head abrasions and swelling and that he lost consciousness when Hickman pressed his arm on his throat.

James Lee, a black minister and member of the Racial Justice Coalition, said the episode erodes trust in a community that hoped the use-of-force policy would bring change.

“What this has done is pause that level of trust,” Lee said.

Still, Lee said Hickman is being held accountable, and he believes Police Chief Tammy Hooper should stay in her job.

“Hopefully she’ll continue to learn from this,” he said.

On Wednesday, Hooper was interrupted by an angry audience as she spoke about the case at a citizen’s police advisory board meeting. Hooper said she put Hickman on administrative duty immediately after the altercation, and started an administrative review. But people attending the meeting demanded to know why a criminal investigation wasn’t sought for months.

Obstacles to resolving the case began after Hickman’s supervisor arrived on scene. The supervisor didn’t immediately review footage of the scene and did not give interview notes to superiors in a timely manner, according to city documents.

Weeks later, after reviewing nearly 60 hours of Hickman’s body camera footage from numerous encounters, the department identified four other instances of rude behavior toward members of the public. Hickman resigned in January.

Asheville’s body camera policy requires department technology officers only to review a sampling of body camera footage from officers around the department each month. Susanna Birdsong, an ACLU lawyer who studies body camera policy, said even when departments require footage review, the rules aren’t always followed. She said the debate needs to go beyond technology to efforts to “stop racially biased policing before it starts.”

Asheville’s City Council released a statement saying that members were “furious” that they weren’t told about the case until the video surfaced. The panel now wants a third-party audit for racial bias among the police serving a city of nearly 90,000 with a population that’s about 82 percent White and 12 percent Black.

“Where’s the progress when we tell tourists to come here,” she asked, “but Black tourists gotta face getting beat down on Biltmore Avenue because you’re jaywalking?”