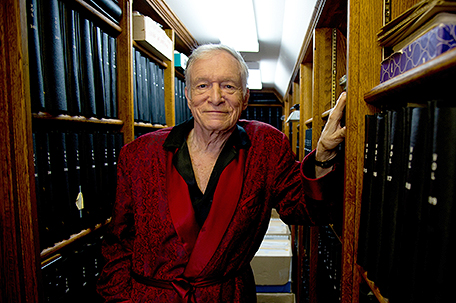 ABOVE PHOTO:  Hugh Hefner poses for a photograph at his home at the Playboy Mansion in Beverly Hills, Calif. (AP Photo/Kristian Dowling)

With Playboy, he helped slip sex out of the confines of plain brown wrappers and into mainstream conversation.

In 1953, a time when states could legally ban contraceptives and the word “pregnant” was not allowed on “I Love Lucy,” Hefner published the first issue of Playboy, featuring naked photos of Marilyn Monroe and an editorial promise of “humor, sophistication and spice.”

The Great Depression and World War II were over and Playboy soon became forbidden fruit for teens and a bible for men with time and money, primed for the magazine’s prescribed evenings of dimmed lights, hard drinks, soft jazz, deep thoughts and deeper desires. Within a year, circulation neared 200,000. Within five years, it had topped 1 million.

Hefner, the pipe-smoking embodiment of the lifestyle he touted, died at his home of natural causes on Wednesday night, Playboy said in a statement. He was 91.

Hefner and Playboy were brand names worldwide. Asked by The New York Times in 1992 of what he was proudest, Hefner responded: “That I changed attitudes toward sex. That nice people can live together now. That I decontaminated the notion of premarital sex. That gives me great satisfaction.”

Playboy founder Hugh Hefner has died at age 91. For decades, Hefner was known as the pipe-smoking hedonist who revved up the sexual revolution in the 1950s and built a multimedia empire. Playboy says Hefner died of natural causes at his home. (Sept. 28)

By the 1970s, Playboy magazine had more than 7 million readers and had inspired raunchier imitations such as Penthouse and Hustler. Competition and the internet reduced circulation to less than 3 million by the 21st century, and the number of issues published annually was cut from 12 to 11. In 2015, Playboy ceased publishing images of naked women, citing the proliferation of nudity on the internet but restored its traditional nudity earlier this year.

Hefner was an ongoing advertisement for his own product, the pipe-smoking, silk-pajama-wearing center of an A-list, X-rated party. By his own account, Hefner had sex with more than a thousand women, including many pictured in his magazine. One of rock ‘n’ roll’s most decadent tours, the Rolling Stones shows of 1972, featured a stop at the Hefner mansion.

Hefner was host of a television show, “Playboy After Dark,” and in 1960 opened a string of clubs around the world where waitresses wore revealing costumes with bunny ears and fluffy white bunny tails. In the 21st century, he was back on television in a cable reality show — “The Girls Next Door” — with three live-in girlfriends in the Los Angeles Playboy mansion. Network television briefly embraced Hefner’s empire in 2011 with the NBC drama “The Playboy Club,” which failed to lure viewers and was canceled after three episodes.

He wasn’t only condemned by conservatives. Many feminist and regarded him as a glorified pornographer who degraded and objectified women with impunity. Women were warned from the first issue: “If you’re somebody’s sister, wife, or mother-in-law,” the magazine declared, “and picked us up by mistake, please pass us along to the man in your life and get back to Ladies Home Companion.”

Hefner added that he was a strong advocate of First Amendment, civil and reproductive rights and that the magazine contained far more than centerfolds. Playboy serialized Ray Bradbury’s “Fahrenheit 451” and later published fiction by John Updike, Doris Lessing and Vladimir Nabokov. Playboy also specialized in long and candid interviews, from Fidel Castro and Frank Sinatra to Marlon Brando and then-presidential candidate Jimmy Carter, who confided that he had “committed adultery” in his heart. John Lennon spoke to Playboy in 1980, not long before he was murdered. Playboy devoted a 1990 cover to a young real estate mogul with a taste for politics: Donald Trump. (Hefner’s son, Cooper Hefner, recently called the Trump cover a “personal embarrassment.“)

The line that people read Playboy for the prose, not the pictures, was only partly a joke.

Playboy’s clubs also influenced the culture, giving early breaks to entertainers such as George Carlin, Rich Little, Mark Russell, Dick Gregory and Redd Foxx. The last of the clubs closed in 1988, when Hefner deemed them “passe” and “too tame for the times.”