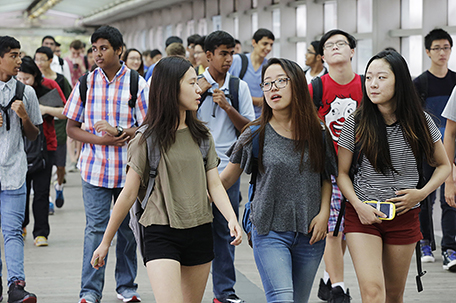 ABOVE PHOTO:  In this Sept. 9, 2015 file photo, students arrive for the first day of school at Stuyvesant High School in New York. A push to diversify New York City’s most elite public high schools is facing a backlash from the group that makes up most of the schools’ current student bodies: Asian-Americans. (AP Photo/Mark Lennihan, File)

NEW YORK — A plan to diversify New York City’s most elite public high schools is drawing fire from the minority group that has come to dominate the schools in recent years: Asian-Americans.

Mayor Bill de Blasio announced last weekend that he wants to scrap the test that governs admission to eight specialized high schools including Stuyvesant High School and the Bronx High School of Science, calling the test “a roadblock to justice, progress and academic excellence.”

Fewer than 10 percent of students who score well enough to gain admission to the schools are Black or Latino, despite the fact that those two groups make up two-thirds of the city’s 1 million public school students.

“It’s not fair. It’s not inclusive. It’s not open to all,” de Blasio said.

But such a change might mean fewer seats for Asian-American students, who now make up 62 percent of the pupils.

“This policy causes chaos in the Asian-American community and we’re here to reject this policy,” John Chan, head of the Coalition of Asian-Americans for Civil Rights, said.

Opponents of the proposed change accused the mayor of pitting minority groups against each other.

“For many of these Asian-American families I represent, they’re mostly new American families, new immigrants who came here,” Assemblyman Ron Kim, a Queens Democrat, said. “They’re just following the rules that were set. For the chancellor to imply they own the admissions test, I think it’s completely uncalled for. They didn’t create this system.”

Tough entrance standards, a rigorous curriculum and a reputation for graduating some of the world’s top scholars have made the city’s exam schools highly sought after among high performing students.

In 2018, about 28,300 middle school students took the test to get into the eight specialized schools. About 5,000 were offered seats.

Asian students comprised the largest number of test-takers, about 8,800, and had the highest acceptance rate, with 29.7 percent of the students getting an offer compared to 3.6 percent of the 5,730 Black students who took the test and 26.2 percent of White students.

City Councilwoman Margaret Chin, a Bronx Science alumna and a Democrat whose district includes Manhattan’s Chinatown, wrote in a letter to de Blasio that Asian-Americans have “a unique relationship” with the specialized high schools.

“For many families, particularly low-income immigrant families, the specialized high schools are the only pathway to a world-class education,” Chin asserted.

Schools Chancellor Richard Carranza, who recently appointed after serving as superintendent in Houston, hit back in TV appearances, telling Fox 5 New York, “I just don’t buy into the narrative that any one ethnic group owns admission to these schools.”

Overhauling the specialized high school admissions process entirely would require action by the state legislature, which won’t vote on the plan until 2019 at the earliest.

As a stopgap measure, the mayor said he would expand a program to offer seats at the schools to low-income students who score just below the cutoff.

Under the expanded version of what’s known as the Discovery program, 20 percent of specialized high school seats will be reserved for low-income students from high-poverty schools who just missed the cutoff.

Defining the plan’s beneficiaries by income skirts the legal issues that would be raised if the city tried to favor any particular ethnic group.

Some students at Stuyvesant, the school that requires the highest score on the admissions test, expressed doubts about even that modest adjustment.

Senior Jessica Sun, a Chinese-American student, said students who missed the test cutoff might struggle at a high-pressure school like Stuyvesant.

“I don’t think they would do too well since it’s very hard and you need a lot of support from your family,” she said.

The three-hour, multiple-choice test is offered to eighth-graders every fall. Many parents spend thousands of dollars on tutors to prepare their children for the exam.

The city has sought to diversify the specialized high schools by offering free test-prep classes to disadvantaged youngsters but those efforts have not yielded measurable results.

De Blasio’s proposed overhaul would eliminate the test entirely and offer specialized high school slots to the top students at every middle school in the city.

City officials estimate that under the plan, similar to the University of Texas system, 45 percent of offers to specialized schools would go to Black and Hispanic students.

“We have so many talented kids who are Black and Latino who will never, under the current system, see the inside of a specialized high school, but actually bring a ton of talent if it was measured properly,” de Blasio said.

The use of a single test for admissions has also been assailed by critics like Shael Polakow-Suransky, who oversaw the city’s contract with the test maker as deputy schools chancellor under former mayor Michael Bloomberg.

“We’re missing a lot of talent by using such a limited instrument,” said Polakow-Suransky, the president of the Bank Street College of Education. “It’s a relic in many ways.”