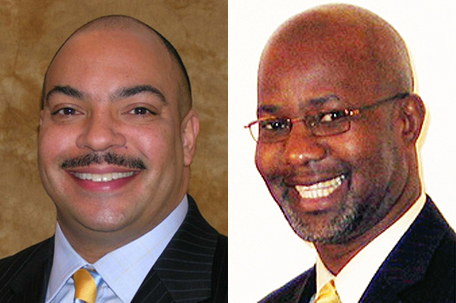 District Attorney R. Seth Williams’s decision a few days ago to launch a grand jury probe into possible corruption charges against a number of African American elected officials was soundly criticized last Thursday by the leadership of the Black Clergy of Philadelphia and Vicinity.  “Black Clergy is deeply concerned with moral issues of this case and we believe that the District Attorney should have sent the case right back to the state Attorney General via Fed Ex as soon as it arrived in his office,” said Rev. Terrence Griffith, Black Clergy President who was flanked by his half dozen cabinet officers.

Thursday’s press conference followed a contentious meeting among nearly two dozen ministers, many of whom are friendly with one of the potential targets of the investigation, State Rep. Louise Williams Bishop, who is also an ordained minister and veteran Gospel radio music host. Rev. Bishop is also 81 years old.“If we don’t stand up for Rev. Bishop and the others, then who will,” said one former Black Clergy President. “We don’t condone illegal behavior, but we also are not prepared to stand by and watch our people brought down when it doesn’t have to happen.”      The back story of what that clergyman was talking about center on a botched investigation started by a Gov. Tom Corbett when he was Attorney General that used a convicted West Indian businessman to offer cash bribes to a number of elected officials in Harrisburg and Philadelphia. According to news accounts, that confidential informant, Tyrone Ali, recorded conversations with a select group of legislators and then handed them cash filled envelopes and in one case, a Tiffany bracelet.When she was elected as the first Democratic Attorney General, Kathleen Kane suspended the probe arguing it had been “tainted” by the lenient deal offered the informant for his past crimes and by racial considerations.

Most of the targets identified in recent news accounts have been African American.

D.A. Williams quickly responded by condemning the Attorney General’s statements and hired the veteran prosecutor who spearheaded the probe.

While refusing to “offer an opinion or the guilt or innocence” of Bishop and the other targets, Rev. Griffith said he and his fellow clergymen thought there should be a “review of the process” of using “morally impaired people” to see if they can assist in bringing criminal cases.

“We do not support corrupt practices,” added Griffith, who is also pastor of the First African Baptist Church in South Philadelphia. “We support high ethical standards.”