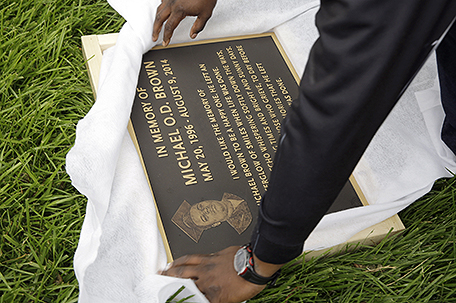 May 23, 2015 Category: Week In Review Posted by: Philadelphia Sun Staff

ABOVE PHOTO:  Michael Brown Sr. unwraps a plaque remembering his son, Michael Brown, to show volunteers as they remove items left at a makeshift memorial to Michael Brown Wednesday, May 20, 2015, in Ferguson, Mo. The memorial that has marked the place where Brown was fatally shot by a police officer in August has been removed and will be replaced with a permanent plaque.  (AP Photo/Jeff Roberson)

FERGUSON, Mo. — The makeshift mid-street memorial that marked where Michael Brown was fatally shot by a police officer last summer was cleared out Wednesday — what would have been his 19th birthday — amid plans to install a permanent plaque in his memory nearby.

Braving chilly rain, volunteers wearing white latex gloves put stuffed animals, candles and other trinkets into trash bags destined for temporary storage, dismantling within minutes the shrine seen by many as a symbol of a new civil rights movement over race and policing.

“There’s not a day that goes by that I don’t think about my son,” Brown’s father, Michael Brown Sr., said earlier Wednesday as he joined Ferguson Mayor James Knowles III in announcing the temporary memorial’s imminent removal. “We’re just really trying to move forward. It just needs to be moved.”

The homage surfaced within hours after Brown, who was black and unarmed, was killed by white Ferguson police officer Darren Wilson on Aug. 9. That event touched off protests and a “Black Lives Matter” movement that only gained momentum with subsequent police killings of unarmed black men in other U.S. cities.

A St. Louis County grand jury and the U.S. Department of Justice declined to prosecute Wilson, who resigned in November. But a separate Justice Department report found racial profiling among Ferguson officers and a municipal court system driven by profit. Release of the report in March led to the resignation of Ferguson’s city manager, municipal court judge and police chief.

Before Wednesday, the shrine stretched for several yards on the two-lane road that bisects a housing complex in the 21,000-resident St. Louis suburb, which is two-thirds black.

The removal of the mid-street shrine and another with stuffed animals on the nearby curb didn’t come without agitation. After a prayer and moment of silence in Brown’s honor, a young man who was passing by objected to the timing of the effort on Brown’s birthday, shouting, “I hope that weighs on your conscience when you go home.” He later returned and exchanged profanities with volunteers, including a woman who struck him in the face before security wrestled him to the ground, briefly handcuffed him and later let him go.

Knowles, while appreciative of the memorial’s symbolism, recently said it has become a public safety issue — and Brown’s father said the same Wednesday.

Brown’s parents have filed a wrongful-death lawsuit against the city of Ferguson, Wilson and the former police chief. Dorian Johnson, who was with Brown at the time of the shooting, also is suing those same parties, accusing Wilson of being the aggressor who used excessive force and “acted with deliberate indifference or with reckless disregard” for Johnson’s rights.

But on Wednesday, as the dismantling neared completion, Brown’s father walked up, toting the weighty metallic plaque that features an inscription borrowed from a popular memorial prayer and will immortalize his son perhaps as early as Thursday. Brown’s father had said the plaque would be placed in the street, but Knowles later told The Associated Press it would be installed on private property near a sidewalk in the general area.

“I would like the memory of Michael Brown to be a happy one,” the marker reads, bearing a likeness of Brown in a graduation cap and gown. “He left an afterglow of smiles when life was done. He leaves an echo whispering softly down the ways, of happy and loving times and bright and sunny days.

“He’d like the tears of those who grieve, to dry before the sun of happy memories that he left behind when life was done.”