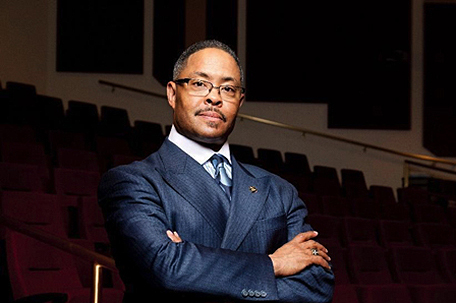 One of the scariest things that has come out in the news about the COVID-19 virus is that you can have it, but not even know it for quite a while.  That’s what happened to Rev. Dr. Alyn Waller, senior pastor of Enon Tabernacle Baptist Church.

On April 23,Waller got on his Facebook page and did a live video to announce to his members and all who follow his page that he tested positive for COVID-19.  Here is what he said in part:

“I want to share something with you,” he began. “I want to encourage you and also solicit your prayers. We’re still in the fight and we’re making sure that testing is getting done. Monday, (April 20th), we had drive-by testing in our parking lot at our Cheltenham campus for Enon. I chose to get tested even though I did not have symptoms and I did not think I needed to be tested, but that I was doing it to encourage others to get tested. The reality is, I tested positive.  Now I am in quarantine.” ”I believe everything is going to be fine,” Waller continued. “I believe this part of the assignment. I believe that I am supposed to go through this with you and other people. I am encouraged and I know that everything is going to be alright. I ask that you pray for those infected and affected by the virus.”

Fast forward to May 5.

Waller sounds and looks healthy and for the last 13 days — not unlike Chris Cuomo, the CNN news anchor who continued broadcasting while recovering from the virus —  this megachurch pastor with 10,000 plus members hasn’t skipped a beat. Waller credits having a strong wife, a good doctor and good common sense, with his thus far seemingly smooth recovery from the virus. He also noted that he knows tons of people have been praying for him.

“Part of my concern with this pandemic, is that in our community some folk don’t want to be transparent once they get a positive test result, “ Waller said. “They’re treating it almost like it’s being diagnosed with HIV.  I was shocked when my test came back positive, however my brain immediately went into the mode of ”next steps” along the way to a full recovery from this thing. As everyone knows, this is the novel coronavirus. It’s new. There’s no antidote, no medication that can be taken at this time, to “cure” coronavirus.”

“What I decided to do was to stay on the healthy course I had been traveling anyway, before I knew I was positive,” Waller continued. “At Enon, as a church family, we were doing the Daniel Fast. I decided I was going to stay on the Daniel Fast even after Lent.  Since I and my family have been honoring the stay at home order the Governor placed on Pennsylvania anyway, staying on the Daniel Fast has been working for me.  Now is not the time to be staying in the house eating a bunch of cookies. I have been living somewhat of a vegan lifestyle since the beginning of Lent and that continues.“

While Pastor Waller described himself initially as asymptomatic, as he’s looked back on the last four weeks or so, he recalls there may have been a couple signs that something wasn’t quite right. He mentioned several Sundays ago, he had a shortness of breath, which he said is very unusual for him.

“I couldn’t really explain it. That’s not really me,” Waller said. “Thinking back on it now, I also recall out of nowhere I was having some eye irritation. A couple doctors I’ve talked to since then,  suggest that could have been one of the other reactions to contracting the virus.”

A major concern –,not just in Philadelphia, but across the country — is how many people may be walking around with COVID-19, but are showing no symptoms and haven’t been tested.

“That’s really the danger in this thing,” Waller said. “It was a non-event for me to be diagnosed positive. However, I could have actually hurt someone, passing on the virus unknowingly.”

Waller also mentioned that at his church he’s conducted a few funeral services for elderly members of the church who were diagnosed with COVID-19. These church members were in the hospital before they passed. Prior to being hospitalized, they were living in nursing homes.

“There’s a lot of issues here in Philadelphia concerning senior citizens living in nursing homes, particularly as it relates to the coronavirus,” he said. “In February and early March, I was still offering to conduct funeral services at our church, with no more than 50 people in attendance, and spaced six feet apart in terms of seating. Now, we are only doing graveside services, as the numbers of confirmed cases of the virus rose in our city.  One of the blessings in having a large church is that we have a healthy roster of ministers who serve at our church, so everything doesn’t fall upon my shoulders.”

Waller says he’s looking forward to being tested again, and as soon as he has a negative test, he said he’ll be able to start doing more.

The organization that came to Enon Tabernacle Baptist Church to offer free drive-by testing on April 20 is the Black Doctors COVID-19 Consortium, founded by Dr. Ala Stanford. Waller gives them praise for the amazing work they’re doing.

“It’s a wonderful group,” he said. “Dr. Ala Stanford is a pediatric surgeon. So it’s not like she’s an epidemiologist or something like that. She saw a need and she filled that need. That is the essence of ministry. That is the essence of service. It shows what one person can do if they put their mind to it. I celebrate her and I celebrate what she has been able to pull together.”

“Sadly, Dr. Stanford shouldn’t have to do this,” Waller added. “Our country and our government should be carrying the [weight] of this, but because of Donald Trump’s ineffective and inefficient response from the very beginning, we’re behind the eight ball.”