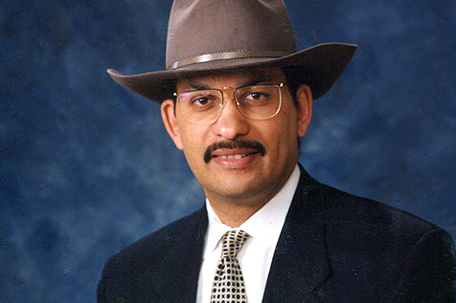 The Philadelphia Association of Black Journalists (PABJ) was heartbroken to learn of the death of longtime member J. Whyatt “Jerry” Mondesire. In his passing, we and other journalists recall the man who was always our conscience.

Mondesire, 65, was an early member of PABJ, helping to build the foundation for the organization. He started his journalistic career at the Baltimore Sun as a writer and the Philadelphia Inquirer as a city-desk editor. He later became a top staffer for the late Congressman Bill Gray.

During his tenure as president of the NAACP, which ended in 2013, Mondesire helped pass laws that gave ex-offenders the right to vote in Pennsylvania. He helped take down Pennsylvania’s voter ID law, fought for better schools, stood up against gun violence and supported low-wage workers fighting for fair pay.

“Jerry used the power of the pen and the bullhorn to advocate for those in Philadelphia without a voice,” says Cherri Gregg, president of PABJ. “He fought not only for Philadelphia’s Black community but for all people of color, and wanted nothing more than for all people in this city to be treated justly.”

His passing has deeply affected our members both locally and nationally, many of whom have been sending condolences to the group and his family.

“Jerry was a champion for equal rights and an early member of the Philadelphia Association of Black Journalists,” said Sarah Glover, president of the National Association of Black Journalists (NABJ) and a former two-term PABJ president. “He’s had a lasting impact on the City of Philadelphia by developing many of the city’s young leaders and journalists. His fearlessness while speaking truth to power stands out as much as his signature cowboy hat. He challenged me and others to be bold in our leadership. I will work to that end and remember the man who fought so hard for equality for all.”

“Jerry was one of the most talented and skillful writers and journalists that I have known,” says Acel Moore, one of the founders of PABJ and NABJ.

Moore met Mondesire when he began working at The Inquirer. “He was a force at the newspaper and made a contribution to journalism in a significant way and made sure his voice was heard as leader of the NAACP on many issues that affected African American people.”

“Mondesire used his God-given talents to speak for many who had no voice, to ask questions that would not be raised and to challenge the status quo on behalf of the disenfranchised,” says NABJ treasurer Greg Morrison, who was also a founder of PABJ. “Initially he was a journalist but chose to follow the legacy of John B. Russwurm and Frederick Douglass, moving into advocacy for people of color. His loss takes his voice from us, but his dedication to presenting a clear and honest expression of the Black Experience will continue through the people he mentored and those whose stories he told. Rest friend, your work in this life is done.”

“Jerry was an integral part in the beginning of PABJ along with several other people,” says Paul Bennett, an early member of PABJ who drafted the organization’s bylaws. “… there’s a group of folks who were early members who helped build the foundation and Jerry was one of those. But Jerry didn’t just write about what was wrong, he also worked to make change. His perspective didn’t just come from journalism, but also from politics. It set him in a different class. When you saw Jerry – you saw a warrior. The question is will his legacy of social action and of being concerned about the community – will that continue? Hopefully, it will.”

“To me, Jerry was one of the great leaders of Philadelphia – right up there with the Cecil B. Moores,” says Loraine Ballard Morrill, news and community affairs director of iHeartMedia’s Philadelphia stations who met Mondesire in the 1980s. “He was someone who made a difference in the lives of people. He wasn’t afraid to take on anybody – not afraid to take on the corporations, not afraid to take on politicians. I don’t see that type of leadership today. I hope that someone will come up that will have the type of passion and courage that Jerry Mondesire had. He was one of my dearest friends. I will miss him.”

On Oct. 17 during PABJ’s annual awards banquet, where Mondesire was always present, we will honor his legacy.