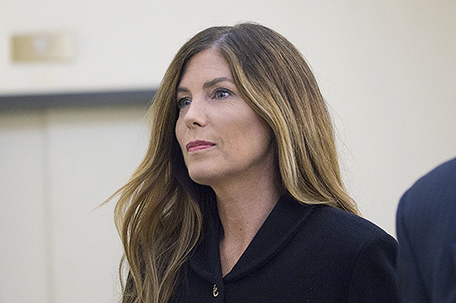 HARRISBURG, Pa — Kathleen Kane, Pennsylvania’s first elected female attorney general, announced her resignation Tuesday, a day after being convicted of abusing the powers of the state’s top law enforcement office to smear a rival and lying under oath to cover it up. Kane’s exit completes a spectacular fall for the former county prosecutor, who soared to victory four years ago as an outsider who promised to break up an “old-boy’s” network in state government. But she squandered her early popularity, feuded with rivals and aides, and ultimately was undone by what prosecutors portrayed as a personal vendetta for her critics and perceived enemies.

Democratic Gov. Tom Wolf, who first called for Kane, also a Democrat to resign when she was charged a year ago, said in a statement shortly after the verdict that Kane needed “to do what is right.”

“As I have made clear, I do not believe Kathleen Kane should be Attorney General of the Commonwealth of Pennsylvania. I believed this when she was charged, and today, after conviction, there should be no question that she should resign immediately,” Wolf said.

Kane’s lawyers vowed to appeal the case. Kane is not running for a second term in office, and she was not required to resign immediately. She could have potentially stayed in office until Jan. 17, when a new attorney general selected by voters in November will be sworn in.

But if Kane had not resigned, the state Senate’s Republican majority leaders threatened a vote to order her removal from office under a constitutional provision never used in modern history. A prior vote in February narrowly failed as all but one of Kane’s fellow Democrats stood by her.

In a statement, House Majority Leader Dave Reed, R-Indiana, said Pennsylvania needs a functional attorney general and cannot have a top prosecutor who is convicted of “breaking the laws she was elected to enforce.”

Kane’s top deputy, Bruce L. Castor Jr., planned a news conference for Tuesday afternoon to address questions about the office. A spokesman would say only that Kane was “spending time today conferring with senior staff.”

Kane, 50, was the first woman and first Democrat elected to the office, winning a landslide election in 2012 that vaulted her to rising-star status from obscurity as a former Lackawanna County staff prosecutor.

On Monday night, a Montgomery County jury convicted Kane of all nine counts against her, including perjury, obstruction and official oppression.

The conviction capped two years of turmoil in Kane’s office that has left her isolated in Pennsylvania’s political, legal and law enforcement community. The state Supreme Court suspended her law license, and she has drained campaign funds to pay legal bills.

After hearing days of testimony about petty feuds, political intrigue and “cloak-and-dagger” machinations, Judge Wendy Demchick-Alloy called Kane a flight risk and ordered her to surrender her passport. She also threatened to jail Kane if she retaliated against the once-trusted aides who testified against her.

Kane showed little emotion as the verdict was announced. She did not testify in her own defense, and she left the courthouse without commenting.

Kane’s honeymoon as attorney general ended in March 2014, when The Philadelphia Inquirer reported that she had shut down an undercover sting that had caught a Philadelphia judge and five state lawmakers taking cash payments or gifts.

Suspecting a former state prosecutor leaked the story to the Inquirer, Kane sought payback and ordered aides to leak secret investigative information to the Philadelphia Daily News designed to show that that prosecutor had never filed charges in a 2009 probe into a Philadelphia NAACP official, prosecutors said.

The NAACP official, who was never charged, was smeared in the process, authorities said.

A Kane defense lawyer told the jury that key witnesses would “say whatever they need to in order to protect themselves.” Kane’s lawyers also complained that the judge had not allowed them to argue in court that the investigation had been propelled by former state prosecutors worried that Kane would reveal their raunchy, pornographic interoffice emails she had discovered on the office’s services.

“We have been denied the opportunity to mount a full defense,” defense lawyer Gerald Shargel said.

Perjury, the only felony charged, can bring up to seven years in prison. The misdemeanor charges include conspiracy, official oppression and false swearing.