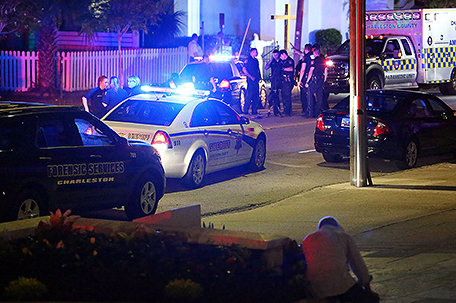 ABOVE PHOTO:  A man kneels across the street from where police gather outside the Emanuel AME Church following a shooting Wednesday, June 17, 2015, in Charleston, S.C. (Wade Spees/The Post And Courier via AP)

Last June 17, a young White supremacist gunned down nine Black parishioners at a historic church in Charleston, South Carolina , marking the violent start to a lethal year of extremist violence in the United States.

In Colorado Springs, Colorado, an anti-abortion extremist would shoot three people to death at a Planned Parenthood clinic.

In Oregon, anti-government militants would take over a wildlife refuge, sparking a standoff that ended with one of the militants being shot and killed by authorities.

And in Orlando, Florida, a gunman would slaughter 49 people at a gay nightclub, one of the worst mass shootings in U.S. history. 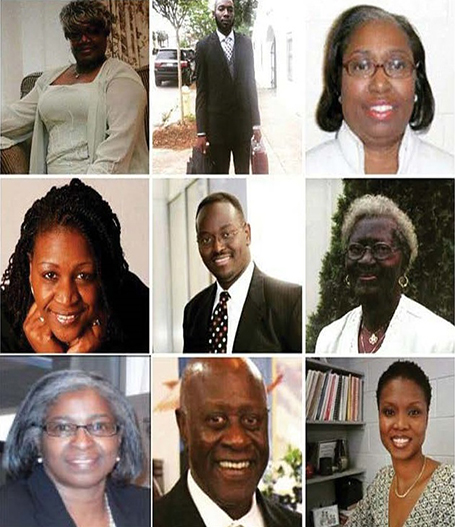 The roll call of communities devastated by extremist violence in the year since the Charleston massacre is evidence that national and local leaders have not addressed the root causes of this violence, such as online radicalization and the mainstreaming of radical right ideas by politicians and other public figures. The country’s changing demographics as well as changes in the cultural and legal landscape – such as the acceptance of same-sex marriage – have attracted some segments of the population to these ideas.

“There was some progress in addressing symbols of hate after the Charleston shooting,” said Richard Cohen, president of the Southern Poverty Law Center. “It was encouraging to see the Confederate battle flag removed from the Capitol grounds in both South Carolina and Alabama. We have, however, failed as a nation to recognize and address the underlying causes of extremist violence. And we won’t truly learn the lessons of Charleston until we address these causes.”

The suspected gunman, Dylann Roof, was indoctrinated into the world of White nationalism online before the shooting at Emanuel AME Church, although he apparently had no personal contact with hate groups or activists. During the attack, he told his victims that African-Americans “are raping our women and taking over the country.” Similarly, the murderer in Orlando may have been radicalized online, according to federal authorities.

The SPLC has documented how the internet has been effective in radicalizing so-called “lone wolves” like Roof and, apparently, Orlando killer Omar Mateen. It has also found that rhetoric once confined to the radical right is now being parroted by many mainstream politicians and other public figures. Most recently, Donald Trump has called for a ban on Middle Eastern immigrants, suggested that a judge was unable to impartially preside over a case because of his Mexican ancestry, and hinted that President Obama is actually on the side of Islamist terrorists like Mateen.

This environment has allowed extremism to flourish. The SPLC has documented a 14 percent rise in the number of hate groups in 2015, from 784 groups in 2014 to 892. Antigovernment “Patriot” groups – armed militias and others animated by conspiracy theories – also grew 14 percent during the same period, expanding from 874 groups to 998. That compares to a mere 149 such groups in 2008, before Obama was elected.

“When you look at the carnage in the year since Charleston – as well as the growth of extremist groups – it’s clear that there’s a combustible atmosphere in our country right now,” said SPLC Senior Fellow Mark Potok. “It is beyond reckless to exploit the anger and polarization that’s out there. Unfortunately, that’s not stopping some people. The attack in Charleston should have been a wake-up call. We’ve paid the price as a nation for ignoring it.”

White militia: “Patriot” groups, surge in number in past year