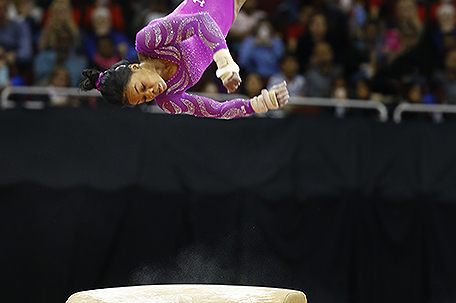 NEWARK, N.J. — Gabrielle Douglas grabbed the American Cup with her right hand, the silver chalice offering tangible proof to her doubters that her bid for another run at glory is very much A Thing.

Yes, there’s work to be done if the reigning Olympic all-around champion wants to chase down supernova teammate Simone Biles in Rio de Janeiro this summer. Yet there was something very familiar about Douglas’ steady and professional performance on Saturday. The pressure spiked. The stakes were raised. And there Douglas was, atop the leaderboard for the first time since that giddy day in London nearly four years ago that transformed her from precocious talent to history maker.

Her winning total of 60.165 was nearly a half-point better than Maggie Nichols and well clear of third-place finisher Elsabeth Black of Canada to give serious momentum to her pursuit at becoming the first female to win consecutive all-around golds in nearly 50 years.

It was also a sign to U.S. national team coordinator Martha Karolyi that the occasionally reticent teenager has been replaced by a more mature, more confident 20-year-old whose ability to deliver in the moment remains as strong as ever.

“I don’t want to just flip it on when the lights are on,” Douglas said before adding with a laugh, “but I’m glad I can, though.”

Even while nursing nagging injuries that forced her to take a semi-extended break the 2015 world championships last fall. Even with the charismatic Nichols looking to challenge for one of the three all-around spots in Rio. Even the seemingly incessant criticism on social media that her presence is just a publicity stunt designed to keep her in the spotlight.

“I just wanted to really show everyone I’m back and back for the right reasons,” Douglas said. “From the bottom of my heart, I believe I can achieve more.”

Consider Karolyi impressed. She entered Douglas in the nine-woman invitational rather than Biles in part to keep Douglas focused. Douglas responded with flashes of the brilliance that carried her to the top of the podium in London. Her vault remains a work in progress. She’s still tweaking her uneven bars set. Yet she was at her best on the beam, traditionally one of her weaker events. Funny, it didn’t look like it. She flipped and spun in her sparkly purplish leotard with an ease that made it seem like she was standing on the floor, not a four-inch wide slab of wood four feet above it.

“When she goes for a skill, you see she goes to make it,” Karolyi said. “She’s not thinking ‘Hopefully I make it.’”

That’s a major distinction between the Douglas of 2016 and the one who triumphed in London. The girl who used to cede the spotlight or a step on the podium now knows she belongs on the biggest stage.

“I just have that ‘Yeah, I got this,’” Douglas said. “I believe in my abilities and I’ve got this.”

This time she was able to enjoy it. Douglas posted the top score in the 2012 American Cup but was entered as an alternate, making her ineligible for the title that went to Jordyn Wieber. This time she’ll let her mother take the Cup back to the trophy room at the family’s home in Southern California, the one that has plenty of room for more Olympic swag.

Nichols was nearly Douglas’ equal, with only a couple of missed connections keeping her from making the final rotation more of a contest and less of a coronation for Douglas. Nichols put together the best floor routine of the afternoon, her polished 15.2 impressive considering Nichols has been dealing with a balky back and didn’t even start working on her revamped floor set until two months ago.

“Whatever mistake I made, I’m going to go back in the gym and do it 100 times,” Mikulak said. “I’m not going to beat myself up and let it bleed over to the next event.”

It’s something Douglas has learned to do during her pragmatic return. Nearly a year after her return to competition following a lengthy post-London sabbatical, she’s doing exactly what she pledged she would do. She’s training. She’s improving. And she’s serious about being serious.

“Sometimes in the training she’s a little shaky,” Karolyi said. “But when the competition comes, the lights on and the green flag goes up, this is what she does.”