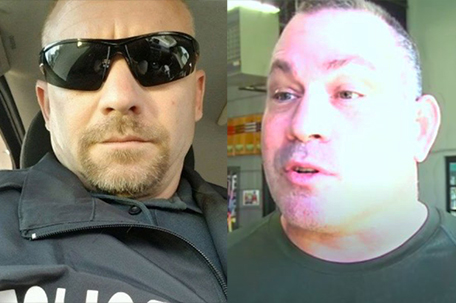 An Oklahoma police chief found himself in the national spotlight for welcoming a known White supremacist into his department, ignoring concerns about the officer.

“He was involved in some kind of group then, and wanted out and the only way he figured he could get out would be to move far away,” said Watson, who added that he believed Alsbrook deserves another chance after supposedly parting ways with a neo-Nazi group.

The news outlet reported last year that Alsbrook was the Texas coordinator of a skinhead group called Blood and Honor, which is an international coalition of racist skinhead gangs. Alsbrook resigned last August from his interim police chief position with the Colbert Police Department in Oklahoma after admitting to his connection with the White supremacist group.

The FBI issued a warning in 2006 about White nationalists and skinheads infiltrating police departments, PBS’s News Hour reported,10 years after the agency released the bulletin in an assessment of whether law enforcement departments heeded the warning.

Since federal investigators issued the report, numerous instances of White supremacists working in law enforcement have surfaced, including a Fruitland Park, Florida deputy police chief and an officer in the department who were outed as members of the Ku Klux Klan in 2014.

Authorities have failed to establish a system of vetting the racist background of police hires, according to the News Hour. However, social media has been instrumental in helping to identify law enforcement officers who are members of White supremacist groups.