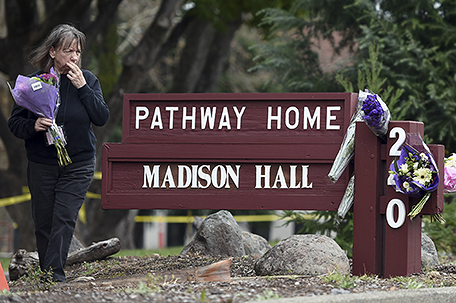 ABOVE PHOTO:  A woman who declined to give her name reacts while placing flowers at a sign where a hostage situation with an active shooter came to a tragic end the night before at the Veterans Home of California in Yountville, Calif. on Saturday, March 10, 2018. Four people were killed, including the shooter. (AP Photo/Josh Edelson)

YOUNTVILLE, Calif. — Authorities in Northern California have so far been tight-lipped about why a former Army rifleman may have killed three women after a daylong siege at a veterans home in Napa County wine country.

Albert Wong, 36, slipped into a going-away party for two employees of The Pathway Home on the campus of the Yountville veterans home campus about 50 miles (85 kilometers) north of San Francisco on Friday, then let some people leave, but kept the three women.

Wong, whose military records show he served in Afghanistan from April 2011 to March 2012, was enrolled in The Pathway Home’s veteran treatment program until he was recently expelled, according to a relative of one of the women.

Law enforcement officials did not respond to questions throughout the weekend about what led to Wong being dismissed from the program or whether officials had alerted police or others to any concerns about his mental health after he was removed from the program. Records also show a state-issued security permit Wong had for a 9mm firearm was canceled in October, but state officials could not immediately say why.

Gonzales Shushereba was seven months pregnant. She was married a year ago and was supposed to travel to Washington, D.C., with her husband this weekend to celebrate their anniversary.

“Jennifer and her colleagues died doing the work they were so passionate about — helping those in critical need,” her husband, T.J. Shushereba said in a statement.

Directors of the veterans program are beginning an exhaustive review of security protocols, said The Pathway Home spokesman Larry Kamer. It may never reopen, he said.

The six residents have been moved to other facilities while officials discuss the future of the program, Kamer tells the San Francisco Chronicle

The facility’s board members are scrutinizing building security, emergency protocols and what kind of screenings are in place for incoming patients.

Cissy Sherr, of Milbrae, said in an interview with The Associated Press that she and her husband became Wong’s guardians after his father died and his mother developed health problems. When Wong became a teenager and Sherr and her husband worked full-time, they decided to put him in foster care.

“He always had a great smile on his face,” she said. “He didn’t have a traditional upbringing but still he just became a fine young man. I can’t imagine what happened. It doesn’t make any sense to me.”