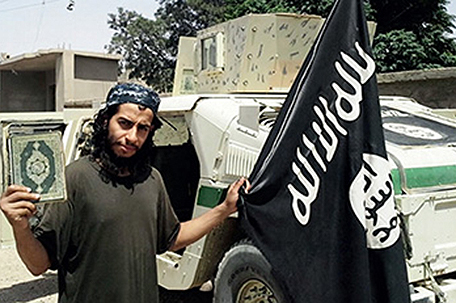 By Thomas Adamson and Samuel Petrequin

PARIS — The Belgian extremist suspected of masterminding the deadly attacks in Paris died along with his cousin when police stormed a suburban apartment building, French officials said Thursday, a day after the chaotic, bloody raid.

Police found Abdelhamid Abaaoud’s body Wednesday in the apartment building in Saint-Denis, but it took some time to identify the 27-year-old using his fingerprints. It was not clear how he died.

Officials believed Abaaoud was in Syria and it’s not clear how he ended up near Paris. Interior Minister Bernard Cazeneuve said France did not know before Friday’s deadly attacks that Abaaoud was in Europe.

A country outside of Europe tipped off Paris on Monday that Abaaoud had been spotted in Greece, Cazeneuve said, but he did not say when exactly Abaaoud was believed to have been there.

He had bragged in the Islamic State’s English-language magazine, that he was able to slip in and out of Europe undetected.

Authorities have not detailed Abaaoud’s exact whereabouts in the days leading up to or actions during the deadly rampage that killed 129 people and injured hundreds of others last week at cafes, a rock concert and the national stadium.

Three police officials have told The Associated Press that a woman who died in the police raid Wednesday was Abaaoud’s cousin. One said the woman, Hasna Aitboulahcen, is believed to have detonated a suicide vest in the building after a brief conversation with police officers. It was not clear if she had any role in the attacks.

The official confirmed an audio recording, punctuated by gunshots, in which an officer asks: “Where is your boyfriend?” and she responds angrily: “He’s not my boyfriend!” Then loud bangs are heard.

The bodies recovered in the raid were badly mangled, with part of Aitboulahcen’s spine landing on a police car, slowing down the identification process, according to one of the officials.

The three all spoke on condition of anonymity because they were not permitted to divulge details of the investigation.

French police launched the operation after receiving information from tapped phone calls, surveillance and tipoffs suggesting that Abaaoud was holed up in the apartment. Eight people were arrested in the raid.