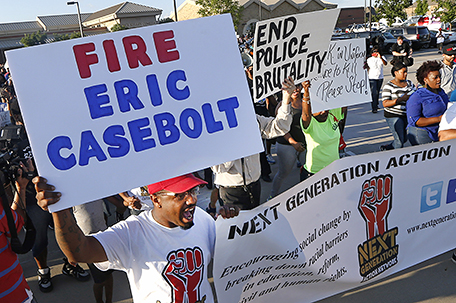 ABOVE PHOTO:  Protestors march Monday, June 8, 2015, during a demonstration  in response to an incident at a community pool involving McKinney police officers  in McKinney, Texas. (AP Photo/Ron Jenkins)

By David Warren and Terry Wallace

MCKINNEY, Texas — A white police officer recorded on video pushing a black girl to the ground at a North Texas pool party resigned from the police force Tuesday.

Officer David Eric Casebolt’s actions were “indefensible,” McKinney Police Chief Greg Conley said at a press conference after the officer submitted his resignation. But Casebolt was not pressured to quit the force, Conley said. 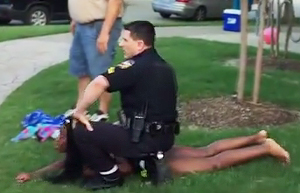 A teenager at the party posted a video online showing the officer pushing a bikini-clad girl to the ground and brandishing his gun to other black teens when officers responded last Friday to calls about the pool party at a community-owned McKinney swimming pool. The 41-year-old former Texas state trooper and 10-year veteran of the McKinney force was put on administrative leave after the incident. His lawyer, Jane Bishkin of Dallas, confirmed Tuesday he had quit the force.

Conley said a review of the video showed that “our policies, our training and our practices do not support his actions.”

Twelve officers responded to the report of fights and a disturbance at the pool party at the Craig Ranch North Community Pool in an affluent area of western McKinney. “Eleven of them performed according to their training,” Conley said. Casebolt did not, he said.

Casebolt’s actions are under investigation and no decision has been made whether charges will be filed against him, Conley said. Charges of interfering with an officer and evading arrest against the only man arrested during Friday’s incident have been dropped, Conley said. Everyone else detained was released.

Bishkin declined to say where Casebolt is now and said the officer had received death threats. The attorney said she would release more information at a news conference Wednesday.

The incident prompted criticism of the affluent suburb of McKinney north of Dallas, which is among the nation’s fastest growing cities, has highly regarded public schools and was ranked by one publication as America’s best place to live.

People who demonstrated this week at a McKinney school compared the city to Baltimore and Ferguson, Missouri, where use of force by police triggered widespread protests and violence.

The resignation is a step in the right direction, said Dominique Alexander, president of the Dallas area-Next Generation Action Network and organizer of the demonstrations.

“We still need a serious investigation into the charges that need to be brought against him in this matter,” Alexander said, adding that Casebolt should be drug tested.

The NAACP is asking the U.S. Department of Justice to review the procedures of the McKinney police force, stopping short of asking for a formal investigation. A review of department policies is needed to ensure officers are responding appropriately to calls involving minorities, the local NAACP chapter said.

Casebolt had been accused of excessive force in a 2007 arrest as part of a federal lawsuit that named him along with other officers. The officers arrested Albert Brown Jr., who authorities said was found with crack cocaine during a traffic stop. Brown, who is black, accused the officers of forcibly searching him after pulling down his pants and slamming his head against a car hood. A defense attorney denied Brown’s accusations. The lawsuit was dismissed in 2009.

The city of McKinney also has been the target of a lawsuit accusing it of racial segregation in public housing.

A lawsuit in 2008 accused the McKinney Housing Authority of restricting federally subsidized public housing for low-income families to older neighborhoods east of U.S. 75. The lawsuit said that in the Dallas area, 85 percent of those receiving so-called “Section 8” housing vouchers are African Americans.

The lawsuit was settled in 2012 with a consent decree, which is an agreement to take specific actions without admitting guilt.

The scrutiny contrasts with McKinney’s high ranking for its quality of life. A Time Inc. publication last year said the city was the best place to live in America, with a median family income in excess of $96,000 and job growth projected at 13 percent. Crime is comparatively low and like other metropolitan suburbs in Texas, McKinney has seen unprecedented expansion. Its population has tripled in the last 15 years to approximately 155,000. About 75 percent of residents are white while nearly 11 percent are black.

The teens were not following police orders, he said, but the officer’s decision to pull out his gun did not help.

“That’s not the way we’re trained,” he said. “We’re trained in policing to de-escalate problem encounters like this. … Obviously, that officer lost his cool. No doubt about it.”

Most people were released, except for one man arrested for interference with the duties of a police officer and evading arrest, police said.

After a viral video of police brutalizing black teenagers in swimsuits in Texas sparked national outrage, a second video has surfaced of a party host detailing a violent encounter before the cops arrived at the scene. 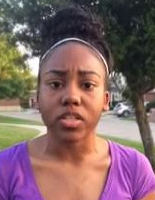 According to 19-year-old community member, now identified by the Washington Post as Tatiana Rhodes, who put together the event to celebrate the end of the school year, several white people at the pool hurled racial slurs at her friends, calling one a “black f-er” and talking about Section 8 public housing. When 14-year-old friend Grace Stone stood up for the group, saying the comments were racist, the man and woman started berating her. Rhodes alleges she stepped in to tell the white couple that they shouldn’t verbally attack a young girl, at which point they told her to “go back to [her] Section 8 home.” One woman, identified as Kate, allegedly slapped Rhodes in the face, before attacking the teenager with the help of another woman.

Rhodes mother, who was also featured in the YouTube video, responded, “I’m just upset that we couldn’t have a peaceful event. [If] it was any issue that they truly had, they should’ve came to me, the adult that was here at the event…and not go to that extreme.”

Brandon Brooks, a white teenager who filmed first video of the police encounter, explained to Buzzfeed News that many of the black kids had special passes to swim in the community pool, although some did jump the fence. “I think a bunch of white parents were angry that a bunch of black kids who don’t live in the neighborhood were in the pool,” he said. However, he maintains, many of the kids who were handcuffed and told to get on the ground were ‘innocent bystanders.’

Having seen the original video on YouTube, Tom Fuentes, a former assistant director for the FBI, told CNN that the officer’s actions were unjustified, and that the main officer was “running around and escalating” the situation. “He’s out of control. He clearly has no self-discipline. He lost control of his temper. Nothing good can happen at that point. Thankfully he didn’t shoot somebody,” he concluded.