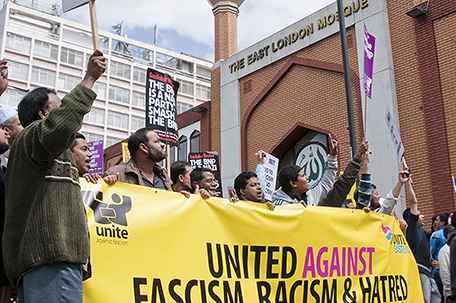 KUALA LUMPUR, Malaysia– Trying to reassure a nation on edge, President Barack Obama said Sunday the Islamic State group “cannot strike a mortal blow” against the U.S., and he warned that overreacting to the Paris attacks would play into extremists’ hands. “We will destroy this terrorist organization,” he vowed.

Ending a trip to Asia, Obama implored Americans not to let the specter of terror cause them to compromise their values or change the way they live.

“We do not succumb to fear,” he said. “The most powerful tool we have to fight ISIL is to say that we’re not afraid, to not elevate them, to somehow buy into their fantasy that they’re doing something important,” Obama said, using an acronym for the terrorist organization.

Since IS militants killed 130 in France nine days ago, Obama’s strategy has come under repeated questioning. He dismissed the group’s global prowess of IS and said, “They’re a bunch of killers with good social media.”

Rejecting the notion of an existential threat, Obama said IS “can’t beat us on the battlefield, so they try to terrorize us into being afraid.”

“I think it is absolutely vital for every country, every leader, to send a signal that the viciousness of a handful of killers does not stop the world from doing vital business,” Obama said. The president and world leaders are set to gather in Paris next week for long-scheduled climate talks. The White House has insisted there will be no change in plans.

Obama also said there was an “increasing awareness” by Russian President Vladimir Putin that IS is Moscow’s gravest threat in the Middle East. IS claimed responsibility for downing a Russian passenger jet in Egypt last month with 224 on board.

Long before that, Obama had urged Putin to use Russia’s air campaign in Syria to target IS, not U.S.-backed rebel groups fighting Syrian President Bashar Assad, a Moscow ally. U.S. officials have said Russia has started focusing some airstrikes against IS. Obama said it was not clear whether Putin could work effectively with the U.S.-led coalition.

Putin “needs to go after the people who killed Russia’s citizens,” Obama said. The two met last week during an economic summit in Turkey.

Nearly five years of fighting between Assad and Syrian rebels has created a vacuum that allowed IS to thrive in both Syria and Iraq. More recently, the militant group has started exporting violence outside its stronghold, radiating fears across the West. U.S. officials have said IS aspires to attack America but they have played down any specific threat.

As Obama spoke in the Malaysian capital, other Western leaders were stepping up their rhetoric against IS, while the European diplomatic hub of Brussels remained under the highest threat level for the second day in a row. French Defense Minister Jean-Yves Le Drian said the West would “annihilate Islamic State worldwide.”

After Obama’s return to Washington early Monday, he will prepare for a White House meeting with French President Francois Hollande on Tuesday, where the leaders will discuss bolstering the international coalition fighting IS. Hollande then goes to Russia for similar talks with Putin.

U.S.-led military efforts come amid parallel talks about a diplomatic solution to end Syria’s civil war. The violence has killed more than 250,000 people and displaced millions, leading to a migrant crisis in Europe and intense concerns in the U.S. about Obama’s plan to take in thousands of Syrian refugees.

U.S. lawmakers are pushing legislation to tighten screening requirements for Syrian refugees; some Republican presidential candidates want to halt their entry. In Turkey and the Philippines last week, Obama pushed back on those proposals as un-American, drawing criticism from some who said he failed to grasp Americans’ post-Paris fears.

The president has since softened his tone. His administration tried to convince U.S. House members that the refugee screening process was sufficient, and Obama began entertaining a U.S. Senate proposal to deny visa waivers to recent visitors to Iraq and Syria. That program lets foreigners enter the U.S. without visas from 38 countries for short stays.

“The American people are right to be concerned,” Obama said Sunday. Still, he said there’s a difference between vigilance and surrendering to fears “that lead us to abandon our values, to abandon how we live.”

Obama’s insistence that Americans not be terrorized carried echoes of the weeks and months after the Sept. 11 attacks, which brought significant changes to air travel, civil liberties law and views about Muslims in the U.S. Then, as in now, leaders asked Americans not to “let the terrorists win.”

“Our nation was horrified, but it’s not going to be terrorized,” President George W. Bush declared five days after those attacks. “We’re a nation that can’t be cowed by evil-doers.

Obama brought up the 9/11 analogy when he answered questions at a news conference Sunday. He said the United States  had survived mass casualties before and pointed out that New York’s Times Square was again filled with people – “rightly so.”

“I was very proud of the fact that the fundamental nature of America and how we treated each other did not change,” Obama said. “We’ve made some bad decisions subsequent to that attack in part based on fear, and that’s why we have to be cautious.”