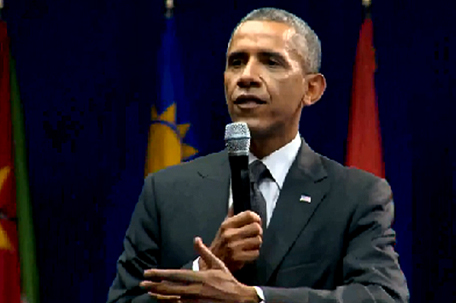 WASHINGTON — The Obama administration on Tuesday announced $14 billion in commitments from U.S. businesses to invest in Africa, as representatives from nearly 100 American and African companies gathered in Washington to discuss ways to boost economic partnerships.

During a panel discussion with CEOs, former President Bill Clinton declared that the U.S. has “only barely scratched the surface” of Africa’s economic potential.

Indeed, Africa’s economy is enjoying rapid advancement. The continent is home to six of the world’s fastest-growing economies. And a decade of solid growth has created a middle class with increased spending power – 350 million strong in 2010 by the African Development Bank’s count, up from 220 million in 2000.

Other nations, most notably China, have been moving aggressively to tap into growing African markets. China surpassed the U.S. as Africa’s largest trading partner in 2009.

“We also realize we have some catching up to do,” said Michael Bloomberg, the former New York City mayor and a billionaire businessman. “We are letting Europe and China go faster than the U.S.”

Also participating in the forum was Jeff Immelt, the CEO of General Electric. During the panel moderated by Clinton, Immelt appealed to the U.S. Congress to renew the charter for the Export-Import Bank, which helps finance American exports.

Some Republicans want to shutter the bank when Congress returns from recess next month, arguing that the bank’s spending is politically motivated and unnecessary. But Immelt said Tuesday that the bank signals to other countries that the U.S. government is interested in investing overseas.

“The fact that we have to sit here and argue for it is just wrong,” he said.

The business commitments being announced by the Obama administration Tuesday include a $2 billion investment by GE by 2018, $200 million in investments across Africa by Marriott, and a $66 million commitment by IBM to provide technology services to Ghana’s Fidelity Bank.

The business forum is part of a broader U.S.-Africa summit being held in Washington this week. Nearly 50 African heads of state are in Washington for the three-day conference.

Beyond boosting business ties, the summit also focuses on security partnerships and supporting a new generation of African leaders.