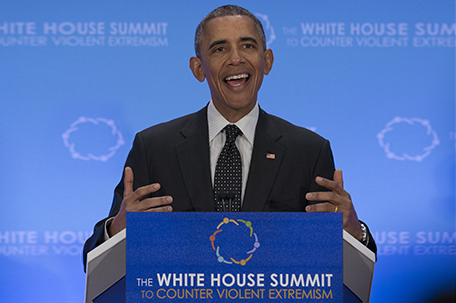 ABOVE PHOTO:  President Barack Obama speaks at the Countering Violent Extremism (CVE) Summit, Thursday, Feb. 19, 2015, at the State Department in Washington. The White House is conveying a three-day summit to bring together local, federal, and international leaders to discuss steps the US and its partners can take to develop community-oriented approaches to counter extremist ideologies that radicalize, recruit and incite to violence. (AP Photo/Carolyn Kaster)

WASHINGTON — Muslims in the U.S. and around the world have a responsibility to fight a misconception that terrorist groups like the Islamic State speak for them, President Barack Obama said Wednesday in his most direct remarks yet about any link between Islam and terrorism.

For weeks, the White House has sidestepped the question of whether deadly terror attacks in Paris and other Western cities amount to “Islamic extremism,” wary of offending a major world religion or lending credibility to the “war on terror” that Obama’s predecessor waged. But as he hosted a White House summit on countering violent extremism, the president said some in Muslim communities have bought into the notion that Islam is incompatible with tolerance and modern life.

“We are not at war with Islam,” Obama said. “We are at war with people who have perverted Islam.”

While putting the blame on IS and similar groups — Obama said the militants masquerade as religious leaders but are really terrorists — the president also appealed directly to prominent Muslims to do more to distance themselves from brutal ideologies. He said all have a duty to “speak up very clearly” in opposition to violence against innocent people.

“Just as leaders like myself reject the notion that terrorists like ISIL genuinely represent Islam, Muslim leaders need to do more to discredit the notion that our nations are determined to suppress Islam,” Obama said.

Issuing such a direct challenge to Muslims marked a clear departure from the restrained, cautious language Obama and his aides have used to describe the situation in the past.

In the days after last month’s shootings at a satirical French newspaper that had caricatured the Prophet Muhammad, Obama avoided calling the attack an example of “Islamic extremism,” and instead opted for the more generic “violent extremism.” Recently, the White House also struggled to explain whether the U.S. believes the Afghan Taliban to be a terrorist organization.

The refusal to directly assess any Islamic role in the terrifying scenes playing out in Europe, the Mideast and Africa has drawn criticism from those who say Obama has prioritized political correctness over a frank acknowledgement of reality. National security hawks, in particular, argued that Obama’s counterterrorism strategy couldn’t possibly be successful if the president was unable or unwilling to confront the true nature of the threat.

White House aides said they were avoiding associating the attacks with Islam for the sake of “accuracy” and to avoid lending credence to the terrorists’ own justification for violence — a strict interpretation of Islam. Frustrated by what they deemed a manufactured controversy, Obama aides have argued that a focus on terminology has distracted from more fruitful conversations about what can actually be done to stop extremist ideologies from spreading.

“These are individuals who carried out an act of terrorism, and they later tried to justify that act of terrorism by invoking the religion of Islam and their own deviant view of it,” White House spokesman Josh Earnest said at the time.

Yet the argument over terminology has increasingly become a distraction, including this week as Obama gathered law enforcement officials, Muslim leaders and lawmakers for a three-day summit on violent extremism. In his remarks Wednesday, Obama acknowledged it was a touchy subject but insisted it was critical to tackle the issue “head-on.”

“We can’t shy away from these discussions,” he said. “And too often, folks are understandably sensitive about addressing some of these root issues, but we have to talk about them honestly and clearly.”

Still, the president took care to differentiate militant groups from the “billion Muslims who reject their ideology.” He noted that IS is killing far more Muslims than non-Muslims, and he called for the world community to elevate the voices of those who “saw the truth” after being radicalized temporarily.

Obama acknowledged that many Muslims in the U.S. have a suspicion of government and police, feeling they have been unfairly targeted, that has confounded efforts to strengthen cooperation between law enforcement and Muslim communities. He effusively praised Muslims who have served the U.S. in the military or in other capacities for generations.

“Of course, that’s the story extremists and terrorists don’t want the world to know: Muslims succeeding and thriving in America,” Obama said. “Because when that truth is known, it exposes their propaganda as the lie that it is.”

Obama has long tried to shift his administration’s terror rhetoric away from what he saw as the hyperbolic terminology used by his predecessor, George W. Bush, particularly Bush’s declaration in the aftermath of the Sept. 11, 2001, attacks that the U.S. was engaged in a “war on terror.”

In a high-profile national security address in 2013, Obama declared, “We must define our effort not as a boundless ‘global war on terror,’ but rather as a series of persistent, targeted efforts to dismantle specific networks of violent extremists that threaten America.”

When it comes to how they are portrayed in the media, those who practice Islam are looking for fairness and balance