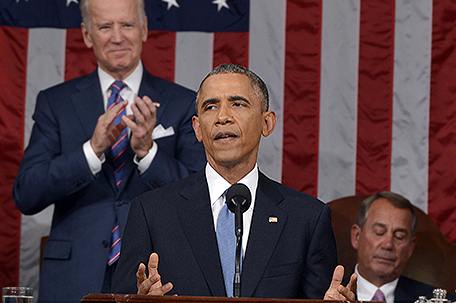 WASHINGTON — President Barack Obama urged the nation Tuesday night to “turn the page” on years of economic troubles, terrorism and lengthy wars, arguing that his presidency had ushered in an era of smarter American leadership and a growing U.S. economy.

“It’s now up to us to choose who we want to be over the next fifteen years, and for decades to come,” Obama said in excerpts released ahead of his State of the Union address.

Obama was speaking to a Congress controlled by Republicans for the first time in his presidency. But the policies he was calling for suggested he had no plans to curtail his own agenda in favor of GOP priorities.

Instead, Obama was proposing higher taxes on the wealthiest Americans with the revenue to be used to pay for middle class tax credits and to make community college free. But key elements of the president’s economic proposals appear unlikely to pass Congress, and he appeared to also be focused on setting a tone for the 2016 election and selling the story of an economy now ready to move off austerity footing.

“The verdict is clear,” Obama said. “Middle class economics works. Expanding opportunity works. And these policies will continue to work, as long as politics don’t get in the way.”

New Iowa Sen. Joni Ernst, giving the Republican response, called for cooperation, too, saying, “There’s a lot we can achieve if we work together.” But Ernst, in her prepared remarks, saw a less rosy version of the economy than Obama’s, and she took him to task.

“We see our neighbors agonize over stagnant wages and lost jobs. We see the hurt caused by canceled health care plans and higher monthly insurance bills,” she said. “But when we demanded solutions, too often Washington responded with the same stale mindset that led to failed policies like Obamacare. It’s a mindset that gave us political talking points, not serious solutions.”

In an unscripted moment, Obama silenced hecklers who cheered when he said “I have no more campaigns to run.”

“I know because I won both of them,” he said, which was not in his prepared remarks. The comment earned a standing ovation from some members of Congress.

He then returned to his prepared remarks, “My only agenda for the next two years is the same as the one I’ve had since the day I swore an oath on the steps of this Capitol — to do what I believe is best for America.”

While the economy was expected to dominate the president’s address, he was also promoting his recent decision to normalize diplomatic relations with Cuba and to launch a military campaign against the Islamic State group in Iraq and Syria. In two potential areas of compromise with Republicans, he was to call on Congress to pass cybersecurity legislation and a new authorization for military action in the Middle East.

“I call on this Congress to show the world that we are united in this mission by passing a resolution to authorize the use of force against ISIL,” Obama said, referring to the Islamic State group.

The centerpiece of the president’s address was to be a bread-and-butter Democratic tax proposal that could increase the capital gains rate on couples making more than $500,000 annually to 28 percent, require estates to pay capital gains taxes on securities at the time they’re inherited and slap a fee on the roughly 100 U.S. financial firms with assets of more than $50 billion.

Much of the $320 billion in new taxes and fees would be used for measures aimed at helping the middle class, including a $500 tax credit for some families with two spouses working, expansion of the child care tax credit and a $60 billion program to make community college free.

The White House rolled out many of the president’s most significant proposals ahead of the speech. And rather than deliver an address littered with policy proposals, administration official said Obama instead planned to talk more about the values that undergird his agenda and promote a story of economic recovery.

Indeed, the economy is on stronger footing than at any other point in Obama’s presidency, with growth on the upswing and an unemployment rate below 6 percent. But Senate Majority Leader Mitch McConnell, R-Ky., cast Obama’s proposals for building on the economic gains as little more than “talking-point proposals designed to excite the base but not designed to pass.”

McConnell urged Obama to work with Republicans to shore up Medicare and Social Security and balance the budget, not just propose “more tired tax hikes.”

Both the White House and Republicans stacked their guest lists for Tuesday’s prime-time address with people who put a human face on their policy positions.

Among those scheduled to sit with first lady Michelle Obama were Chelsey Davis, a student from Tennessee who plans to graduate from a community college in May; Dr. Pranav Shetty, who has been working on the Ebola outbreak in West Africa, and Alan Gross, who was released from a Cuban prison last month as part of Obama’s decision to normalize relations with the communist island nation.

House Speaker John Boehner announced that his guest would be Cuban dissident Jorge Luis García Pérez, who spent 17 years in a Cuban prison. Florida Republican Sen. Macro Rubio was bringing Rosa Maria Paya Acevedo, whose father was a well-known Cuban dissident who was killed in a car accident that his family believes was suspicious.

Obama was touting his decision to resume relations with Cuba after a half-century of estrangement. He wants Congress to lift the decades-long economic embargo on Cuba, though administration officials say they don’t expect lawmakers to move on that request quickly.

Other foreign policy matters expected to get a mention in the State of the Union address were the ongoing nuclear negotiations with Iran, and Russia’s actions in Ukraine.

The morning after the State of the Union, Obama was headed to a pair of conservative-leaning states to promote his agenda for his seventh year in office: Idaho and Kansas.

Think Progress.com contributed to this article.

At Obama’s midpoint, an altered State of the Union