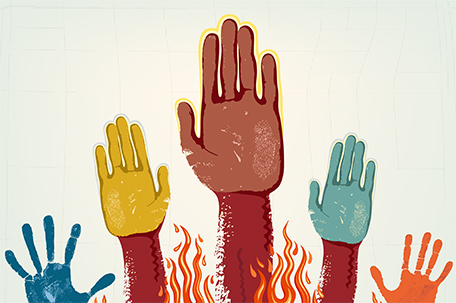 In an unsparing critique of Republicans, President Barack Obama said yesterday that the GOP is threatening voting rights in America more than at any point since the passage of the historic 1965 law expanding rights at the ballot box to millions of black Americans and other minorities.

“The stark, simple truth is this: The right to vote is threatened today in a way that it has not been since the Voting Rights Act became law nearly five decades ago,” Obama said in a fiery speech at civil-rights activist and television host Al Sharpton’s National Action Network conference.

The election-year warning comes as Obama seeks to mobilize Democratic voters to fight back against state voting requirements and early balloting restrictions that many in his party fear will curb turnout in November. The president vowed that he would not let the attacks on voting rights go unchallenged but offered no specific actions his administration planned to take.

The president pinned efforts to curb access to the ballot box directly on the GOP, declaring that the effort “has not been led by both parties. It’s been led by the Republican Party.”

Mocking the Republicans, he said, “What kind of political platform is that? Why would you make that a part of your agenda, preventing people from voting?”

For the remainder of the year, no political issue is bigger for Democrats than their ability to motivate voters to turn out in November. Control of the Senate, now in the hands of Democrats, is at stake.

But traditionally weak midterm turnout by Democrats coupled with efforts in some states to limit early voting and to enact voter-identification requirements have prompted the president and his party to raise alarms and step up their get-out-the-vote efforts.

Republicans have long argued that ID requirements and other voting controls are reasonable measures to safeguard the balloting process, not to suppress voter turnout. Democrats say photo-identification requirements especially affect minority or low-income voters who might not drive and thus wouldn’t have an official government ID.