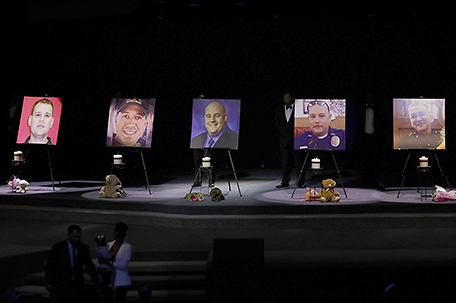 ABOVE PHOTO:  Photos of the five police officers killed in Dallas last Thursday are highlighted during a service that include a memorial to the officers as well as a town hall meeting to discuss other recent shootings, at the The Potter’s House, Sunday, July 10, 2016, in Dallas.  (AP Photo/Eric Gay)

WASHINGTON — President Barack Obama was in a different city but still in an all-too-familiar place when he led the nation in honoring more lives cut short by gun violence, this time five white police officers slain by a black man who said he wanted revenge for the killings of blacks by police.

Obama tried Tuesday to help grief-stricken Dallas begin to heal less than a week after its officers were killed and others wounded by an Army veteran-turned-sniper. Obama denounced the shooting as a “vicious, calculated and despicable attack on law enforcement” by a “demented” individual.

Just a few weeks ago, Obama spent hours in Orlando, Florida, consoling the loved ones of 49 people who were killed in a shooting rampage at a nightclub.

In what has become an unwelcome but regular duty of his presidency, Obama addressed an interfaith memorial service in Dallas for the officers. They were killed last Thursday while standing guard as hundreds of people peacefully protested the police killings of black men in Louisiana and Minnesota earlier in the week.

The attack ended with the gunman, Micah Johnson, 25, blown up by a bomb delivered by a police robot. The black Army veteran portrayed the attack on the white officers as payback for the fatal police shootings of black men in Baton Rouge, Louisiana, and suburban Minneapolis.

Portions of both shootings were videotaped and broadcast nationwide, leading to fresh outrage, protests and scores of arrests. The killings also put the country on edge, heightened racial tensions and pushed the issue of the use of deadly force against black males by white police officers to the forefront.

Obama sought to bridge those issues with his tribute to the fallen five, which include a former Army Ranger, a Navy veteran and a newlywed starting a second family.

Some police officials blame the president for the rise in racial tension, saying he is insufficiently supportive of law enforcement. In comments since the Dallas shooting, Obama has urged the public to recognize and respect that police officers have a tough job.

The president, joined by his wife, Michelle, and Vice President Joe Biden and his wife, Jill, will also meet privately with the families of the slain officers as well as the injured to convey the support and gratitude for their service and sacrifice that has been expressed around the country. At least nine other officers and two civilians were injured in the attack.

Former President George W. Bush and his wife, Laura, will also attend. Bush, a Dallas resident, will also speak at the service.

“The president is hoping to offer some measure of comfort,” Earnest said.

Obama and Biden met Monday with police chiefs, sheriffs and rank-and-file officers to discuss adopting a series of reforms that were drafted by a White House task force on policing, as well as how to restore trust between police officers and the communities they are sworn to serve and protect.