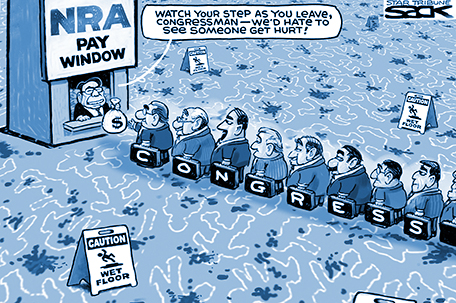 By Hope Yen and Stephen Braun

WASHINGTON — The National Rifle Association is opposing a ban on “bump stocks” like the device used by the Las Vegas gunman to turn semi-automatic weapons into rapid-fire guns, stressing its support for more limited regulations.

The powerful lobby last week surprised many gun control advocates by embracing possible restrictions on the bump stock devices in the wake of the shootings that killed more than 50 people and injured 500, prompting bipartisan support in Congress for regulating or banning bump stocks.

But on Sunday, the NRA drew a line on an outright ban. Chris Cox, the NRA’s chief lobbyist, said too much public focus was being placed on limiting the devices rather than preventing bad human behavior. He said it was the responsibility of the U.S. Bureau of Alcohol, Tobacco, Firearms and Explosives — not Congress — to regulate the sale of bump stocks.

“We don’t believe that bans have ever worked on anything. What we have said has been very clear — that if something transfers a semiautomatic to function like a fully automatic, then it ought to be regulated differently,” Cox said.

It was a sign of a possible rocky road ahead for action by Congress.

“Regulations aren’t going to do it. We need a law. It can’t be changed by another president,” said Feinstein,  a longtime advocate of stricter gun control measures. She lamented the stratified lines of debate in “a gun-happy country.”

The debate over how to regulate bump stocks comes in the aftermath of the shooting at a Las Vegas music festival last week, America’s deadliest in modern history. While senior congressional Republicans and the Trump administration have expressed openness in restricting the gun accessories, lawmakers are divided over whether to rely on legislation or push for an executive branch order.

Bump stocks are accessories that substitute for the regular stock and grip of a semi-automatic rifle and allow the weapon to fire continuously, some 400 to 800 rounds in a single minute. Bump stocks were found among the weapons used by sniper suspect Stephen Paddock and explain why victims in Las Vegas heard what sounded like automatic-weapons fire.

The bump stock device, which retails for around $200, causes the gun to buck back and forth, repeatedly “bumping” the trigger against the shooter’s finger. Technically, that means the finger is pulling the trigger for each round fired, keeping the weapon a legal semi-automatic. Because it creates a significant rocking motion it also means that the gun is “spraying” bullets and it’s difficult to hit a target.

Adding to the uncertainty over the devices, the U.S. Bureau of Alcohol, Tobacco, Firearms and Explosives said last week it was in no position to re-examine its 2010 judgment that bump stocks were legal and that Congress would have to act.

“We think ATF ought to do its job, look at this, and draw a bright line,” said Wayne LaPierre, CEO of the National Rifle Association. He said the group has been clear in supporting current law that bans fully automatic firearms and is concerned that action by Congress could “fuzz the line” such as by imposing new restrictions on semi-automatic weapons.

Feinstein said her legislation banning bump stocks had attracted “Republican interest” although the 38 co-sponsors so far were all Democrats. The No. 2 Senate Republican, John Cornyn of Texas, has said he’s open to legislation and that he’d spoken with Judiciary Committee Chuck Grassley, who was interested in holding a hearing.

Sen. Ron Johnson,  who heads the Homeland Security and Governmental Affairs committee, said Sunday he would be willing to support bump stock restrictions either by fiat or by a new law. “However that gets fixed, I’ll support it,” he said.

Seeking broader consensus, Sen. Chris Murphy, said that if Republicans were willing to pass a bill banning bump stock devices — like those used by the Las Vegas hotel sniper — he would support the legislation, even if it was not accompanied by any other restrictions of weapons purchases. Murphy, an ardent supporter of gun control after the 2012 mass shooting at an elementary school in Newtown, Connecticut, said he would be willing to hold off for his broader goal, the institution of background checks for weapons buyers, if the Senate agrees on a narrower bump stock ban.

Feinstein spoke on NBC’s “Meet the Press” and CBS’ “Face the Nation,” LaPierre also was on CBS, Cox appeared on “Fox News Sunday” and Murphy and Johnson were on CNN’s “State of the Union.”

Vulnerable GOP senators side with NRA on gun votes