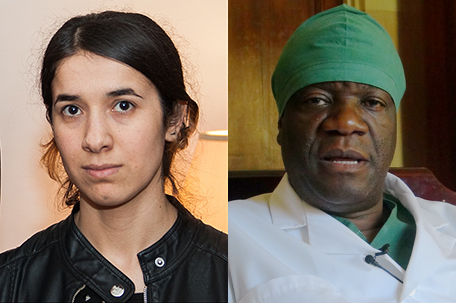 By David Keyton and Jim Heintz

STOCKHOLM — The Congolese doctor who shares this year’s Nobel Peace Prize for his efforts to end the use of rape and sexual violence as weapons of war on Monday called for strong international action against the abuse, including reparations for victims.

Dr. Denis Mukwege, founder of a hospital in eastern Congo that has treated tens of thousands of victims of the country’s conflicts for two decades, and Iraqi activist Nadia Murad received the prize at a ceremony in the Norwegian capital, Oslo. They split the 9-million-Swedish-kronor ($1 million) amount.

In an address interrupted by frequent applause, Mukwege criticized the international community for allowing Congolese to be “humiliated, abused and massacred for more than two decades in plain sight.”

“I insist on reparations, measures that give survivors compensation and satisfaction and enable them to start a new life,” he said. “I call on states to support the initiative to create a global fund for reparations for victims of sexual violence in armed conflicts.”

He said countries should take a stand against “leaders who have tolerated, or worse, used sexual violence to take power. … This red line would consist of imposing economic and political sanctions on these leaders and taking them to court.”

Dozens of armed groups in Congo profit from mining the country’s trillions of dollars’ worth of mineral resources, many of which are crucial to popular electronic products such as smartphones.

“As consumers, let us at least insist that these products are manufactured with respect for human dignity. Turning a blind eye to this tragedy is being complicit,” Mukwege said. An outspoken critic of Congo’s government, he added: “My country is being systematically looted with the complicity of people claiming to be our leaders.”

Murad, a member of Iraq’s Yazidi minority, was kidnapped and sexually abused by Islamic State militants in 2014. She became an activist after escaping and finding refuge in Germany.

She told the ceremony that she wants world leaders to translate sympathy for victims into action against the abusers.

“The fact remains that the only prize in the world that can restore our dignity is justice and the prosecution of criminals,” Murad said.

“Young girls at the prime of life are sold, bought, held captive and raped every day. It is inconceivable that the conscience of the leaders of 195 countries around the world is not mobilized to liberate these girls,” she said.

“What if they were a commercial deal, an oil field or a shipment of weapons? Most certainly, no efforts would be spared to liberate them,” she said.

“This award obligates Denis Mukwege and Nadia Murad to continue their vital work. But the award obligates us to stand side-by-side with them in the struggle to end wartime sexual violence,” she said.

The winners of the medicine, physics, chemistry and economics Nobels were to receive their awards later Monday in Stockholm. No winner of the literature prize was named this year.